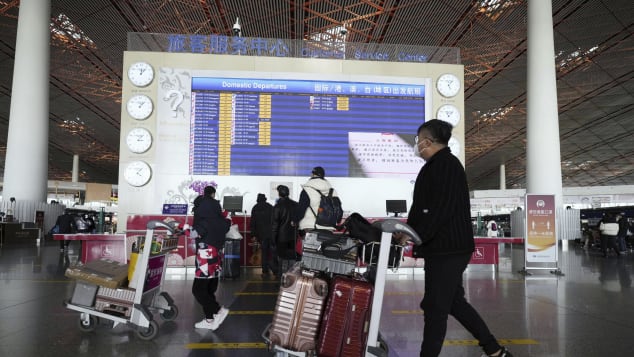 But this isn’t early 2020. The familiar scene is playing out now as China battles its biggest-ever outbreak, after abandoning its stringent zero-Covid approach and partially reopening its border three years into the pandemic. The country announced this week it will drop quarantine requirements for international arrivals and resume outbound travel for Chinese citizens, which had previously been banned.

It prompted a surge of eager travelers booking flights out of the country, hungry for a trip after several years of isolation — but it also sparked concern among some overseas governments as China’s Covid cases skyrocket. Almost half of the 212 passengers who arrived in Italy’s Milan airport from China on Monday tested positive for Covid, said a regional health chief on Wednesday.

But while countries including the US and Japan move to impose restrictions, others such France and Great Britain have made it clear they are ready to welcome Chinese travelers — who, pre-pandemic, had been a major driver of international tourism.
China responded by claiming its Covid situation was “under control,” and accused Western media of “distorting” its recent policy changes.
“The real intention is to sabotage China’s three years of Covid-19 control efforts and attack the country’s system,” state-run tabloid Global Times said in an article Thursday, citing experts in calling the restrictions “unfounded” and “discriminatory.”

Which countries are imposing testing requirements?
Japan announced on Tuesday that all travelers who have either been to mainland China or have traveled there within seven days will be tested on arrival starting Friday, and that the government would limit the number of flights to and from China.

The country’s prime minister, Fumio Kishida, pointed to the lack of official Chinese government data. “While there is information that the infection is spreading rapidly in mainland China, concern has been growing in Japan as it is difficult to grasp the detailed situation,” he said.

Indian authorities implemented similar guidelines on travelers not only from China, but also several nearby locations including Japan, South Korea and Thailand. The guidelines are aimed at ensuring that Covid doesn’t spread quickly as it has in China, authorities said Tuesday.
Taiwan also announced mandatory tests on arrival for travelers coming from mainland China on Wednesday. The self-ruling island has banned mainland Chinese tourists since the pandemic, and only allows Chinese citizens to visit for business or family reasons.

In all three places, those found positive on arrival will be required to quarantine for several days.
Meanwhile, the United States announced it will require a pre-departure negative test result for travelers from China, including Hong Kong and Macao — as well as popular third-country gateways such as Seoul, Toronto and Vancouver.

The measures are particularly striking given most of these places — especially in the West — have long reopened their borders and abandoned testing requirements as part of the transition to living with Covid. In Europe, Italy — the first country on the continent to be hit by a widespread outbreak in 2020 — announced it would require Covid tests for all travelers coming from China, with the health minister saying it was essential to identify “any variants … in order to protect the Italian population.”

On Thursday, the European Centre for Disease Prevention and Control (ECDC) said China’s surge in cases was not expected to impact the Covid situation in the European Union, and called restrictions on travelers from China “unjustified.”

So are variants a risk?
Yanzhong Huang, senior fellow for global health at the Council on Foreign Relations, acknowledged the risk of a new variant emerging in “unvaccinated populations.”
“Even though (in China) officially they have 90% of the population vaccinated with two doses of the inactivated vaccines, you still have a large percentage of the elderly who are not vaccinated … and many of the people who are vaccinated did so more than six months ago, so their antibody levels already are very low,” he said. “So we can’t rule out the possibility that new variants can indeed emerge in China and spread to other parts of the world.”

One federal US health official pointed to the speed of the outbreak in China, saying: “With so many people in China being infected in a short period of time, there is a chance and probability that a new variant will emerge.”

US officials have also expressed concerns about China’s lack of transparency surrounding the recent surge in cases, particularly the absence of genome sequencing information that could help detect new strains of the coronavirus. However, GISEAD, a global virus database, said Chinese authorities had been submitting more genomic information from recent samples — and that these seem to match the variants that are already circulating globally.

Karen Grepin, an associate professor at the School of Public Health at the University of Hong Kong, said a country’s best defense against potential variants was to focus on domestic policies protecting its own population — such as stepping up vaccinations, maintaining social distancing and other basic public health measures.  “In a lot of parts of the world, the pandemic feels like it’s over … but at the end of the day, (these measures) are ultimately what prevents the transmission of the virus,” she said.

“If countries are at the point where they think those things are no longer important, because for example they’ve developed so much population immunity, then why care about a couple of new cases coming in from China?”

Are the measures effective?
Despite the potential risk, many health experts have widely criticized the new testing requirements as ineffective at best and alarmist at worst.
“I don’t see any convincing reason to justify this move,” said Huang, from the Council on Foreign Relations. “So far we don’t have any evidence supporting whether there are indeed such variants emerging in mainland China.”

“I can understand concerns because of the lack of transparency, because of the lack of sharing of the genomic sequencing,” he added. “But even with a ban, we cannot prevent the spread of the virus. And assuming there is indeed new variants emerging in mainland China, we would just delay the spread, we’re not going to prevent the virus from spreading to other parts of the world.”
Grepin echoed this point, saying: “In reality, we do not have the scientific evidence to support the effectiveness of these measures in practice.”

If an infectious variant does emerge, it will likely enter the United States through other countries anyway, she said, pointing out that restrictions “did very little” when Omicron emerged last fall.
Pre-departure testing — which the US is requiring — is also only somewhat effective, since many new variants have a short incubation period, meaning “there will still be cases that will make it through,” she added.

Political pressure and xenophobia
There are a few reasons why countries may be imposing these restrictions despite their questionable use, Grepin said — one being the fear that Chinese Covid patients could be fleeing elsewhere to seek treatment with hospitals at home completely overwhelmed.

But, she added, this is quite unlikely. The volume of travel coming out of China is still extremely low, partly due to the limited number of flights. And at the rate Covid is spreading, it would pose a logistical challenge for infected patients to immediately get visas and book flights overseas.

Instead, the recent flurry of restrictions likely reflects the “political pressure (on authorities) to look like they’re doing something,” she said. “We see one country do it and then other countries follow suit.”

Experts are also warning that singling out China could heighten the risk of greater anti-Chinese racism, as seen early in the pandemic when Asians around the world faced discrimination and violent hate crimes. China isn’t the only place seeing an uptick in cases, said Huang. “I don’t see why China should be treated differently from other countries like Australia, for example, which is swimming in Covid,” he added.

The US is likely importing tens of thousands of cases from around the world even now, said Grepin, adding that 1 to 3% of all international travelers have Covid — so there’s little point in specifically targeting Covid coming from one country.

“We’ve seen this throughout the pandemic — when certain measures are being targeted at people coming from a particular place, it reinforces stereotypes or beliefs that viruses are coming from certain parts of the world … It’s just simply not true,” she said.

Which countries are welcoming Chinese travelers back?
By contrast, many countries have thrown open their doors in welcome.
The tourism departments and embassies of France, Thailand, Canada, Australia, New Zealand, Denmark, Norway, the Netherlands, Spain, Portugal, Austria and Switzerland all posted messages on Weibo, China’s version of Twitter, inviting Chinese tourists.

“Chinese friends, France welcomes you with open arms!” the French embassy wrote on Weibo. The Thai national tourism administration wrote: “Thailand has been waiting for you for three years!”

Many Weibo users celebrated their newfound freedom to travel, with the hashtag “Where to travel abroad next year” garnering close to 80 million views.
Before the pandemic, China was the world’s largest market for outbound travel, having skyrocketed from 4.5 million travelers in 2000 to 150 million in 2018. The country is also the world’s largest spender, accounting for $277 billion or 16% of the world’s total $1.7 trillion international tourism spending, according to the UN’s World Tourism Organization.
China alone contributed 51% of the travel and tourism GDP in the Asia-Pacific region in 2018, according to the World Travel and Tourism Council. And Chinese travelers typically accounted for 30% of all arrivals in Thailand.

Brexual healing? EU and Britain dream of a fresh start in 2023