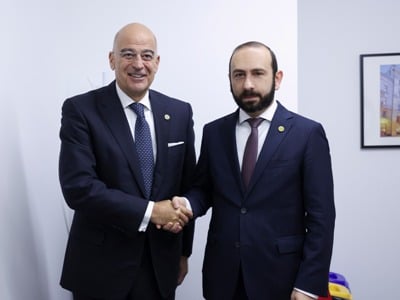 According to the press service of the Armenian Foreign Ministry, the Foreign Ministers discussed several issues of Armenian-Greek interaction, based on the ties between the two brotherly nations.

The sides exchanged views on the security situation in their respective regions and the international situation.

Minister Mirzoyan presented his counterpart the Armenian side’s positions on the settlement of Armenian-Azerbaijani relations, as well as the situation around the Nagorno-Karabakh conflict. Ararat Mirzoyan stressed that the bellicose rhetoric of the Azerbaijani side and unceasing border provocations lately contain a great danger of new aggressions by the Azerbaijani armed forces.

The sides also discussed the process of normalization of relations between Armenia and Turkey.