The richest 1% now has as much wealth as the rest of the world combined, according to Oxfam.

It uses data from Credit Suisse from October for the report, which urges leaders meeting in Davos this week to take action on inequality.

Oxfam also calculated that the richest 62 people in the world had as much wealth as the poorest half of the global population.

It criticised the work of lobbyists and the amount of money kept in tax havens.

Oxfam predicted that the 1% would overtake the rest of the world this time last year.

The figures carry various caveats, for example, information about the wealth of the super-rich is hard to come by, which Credit Suisse says means its estimates of the proportion of wealth held by the 10% and the 1% is “likely to err on the low side”. 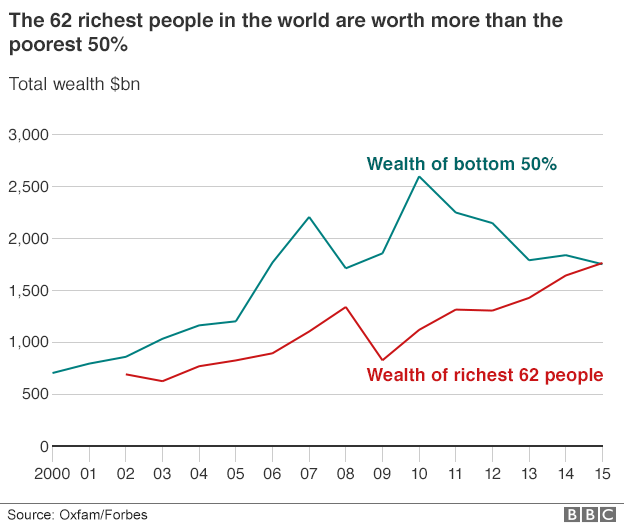 As a global report, the figures also necessarily include some estimates of levels of wealth in countries from which accurate statistics are not available.

Oxfam said that the 62 richest people having as much wealth as the poorest 50% of the population is a remarkable concentration of wealth, given that it would have taken 388 individuals to have the same wealth as the bottom 50% in 2010.

“Instead of an economy that works for the prosperity of all, for future generations, and for the planet, we have instead created an economy for the 1%,” Oxfam’s report says.

The trend over the period that Credit Suisse has been carrying out this research has been that the proportion of wealth held by the top 1% fell gradually from 2000 to 2009 and has risen every year since then.

In fact, it is only in the 2015 figures that the proportion held by the top 1% overtakes the share taken by them in the first report in 2000.

Oxfam calls on governments to take action to reverse this trend.

It wants workers paid a living wage and the gap with executive rewards to be narrowed.

It calls for an end to the gender pay gap, compensation for unpaid care and the promotion of equal land and inheritance rights for women.

And it wants governments to take action on lobbying, reducing the price of medicines, taxing wealth rather than consumption and using progressive public spending to tackle inequality.

French Ambassador to Greece, Christophe Chantepy, with students of the 1st Lyceum of Koropi