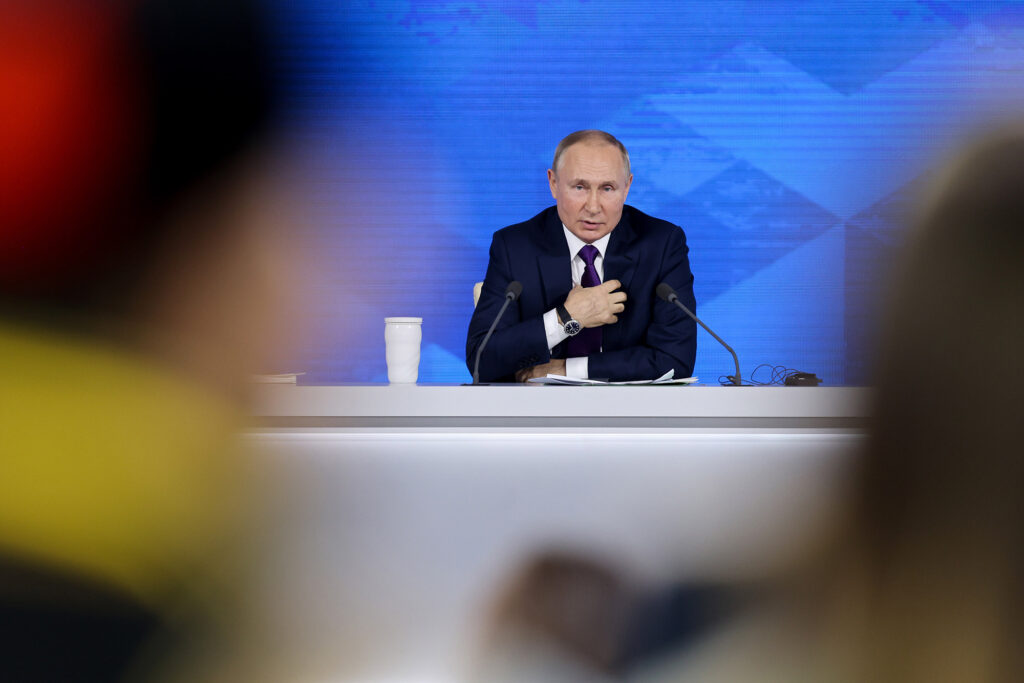 Vladimir Putin, Russia’s President, delivers his annual news conference in Moscow, Russia, on Thursday, Dec. 23, 2021. Russia is continuing to build up forces close to Ukraine even as its preparing for security talks with the U.S., keeping up pressure with a deployment that could turn into a rapid invasion or a long-term threat. Photographer: Andrey Rudakov/Bloomberg via Getty Images

Putin has been holding large end-of-year press conferences almost every year since 2001 after becoming president, according to state news agency TASS.

The only years when he didn’t hold an annual press conference were 2005, when he served as president, and also between 2008-2012 when he served as prime minister, according to TASS. Former US ambassador to Russia John Sullivan believes that Putin is avoiding scrutiny.

“I think it’s a sign of concern about his domestic support,” Sullivan told CNN on Monday.

“Putin doesn’t want to go out and spend hours before journalists, even state media, and risk getting asked difficult and embarrassing questions.”

As Moscow’s war in Ukraine approaches the 10-month mark, some economists believe Russia will face growing economic hardship and a population that will grow increasingly critical of the “special military operation.” It comes amid mounting defeats such as seen in Ukraine’s southern city of Kherson, where a determined Ukrainian offensive forced a Russian withdrawal.

“We were supposed to win. Officials promised to capture Kyiv in three days but, as we see, it turned out to be foolish,” Sergey Javoronkov, a senior researcher at the Gaidar Institute for Economic Policy, told CNN last month.

At last year’s press conference, Putin was asked about the build-up of Russian forces on the Ukrainian border and the country’s emerging alliance with China, as well as common criticisms of his regime such as the treatment of imprisoned opposition leader Alexey Navalny.

In addition to a large conference with the media, in previous years Putin has also addressed the Federal Assembly and held a marathon question-and-answer session with Russian citizens, called Direct Line.

During Monday’s call with journalists, Peskov didn’t mention a date for Putin’s address to the Federal Assembly, nor a Direct Line session.

However, on November 14, Peskov told Russian state news outlet TASS that Putin would address the Federal Assembly before the end of 2022.

Peskov had said earlier that the dates of Putin’s annual address to the assembly and the Direct Line session depend on his schedule, which is very dynamic in light of current events, according to TASS.