In recent years currencies such as Bitcoin have emerged that are not issued by banks but exist in the digital world only, relying on public and shared databases to have balances and transactions verified. The EU should set up a task force to monitor developments in this area and prepare to step in with regulations if necessary, according to a report to be debated by MEPs on 25 May and voted on the following day. The report author, Jakob von Weizsäcker, a German member of the S&D group mentioned the following. 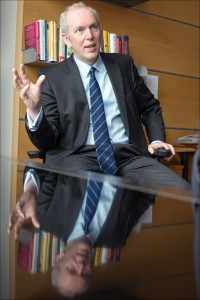 Your report says that virtual currencies are a fast, decentralised and cheap way of making payments. Do you think they can emerge as a viable alternative to bank transfers?

It is an exciting technology because it permits to build trust in a system without a central authority. It is possible to imagine that in the future money transfers will take place in a decentralised way, potentially at a much lower cost than currently. It is also possible to imagine that existing players like SWIFT will be using that technology to become more efficient themselves. But the potential applications of the underlying technology go far beyond virtual currencies. This technology could be used in many areas, from clearing and settling financial transactions to managing digital rights and fighting VAT fraud. It is an open question how this technology will evolve and how it is going to be applied. Some of these changes may come very rapidly and then they may require regulation.

Do you see the anonymity of transactions as a threat, especially with regard to money laundering?

I wouldn’t call it anonymity, you have your unique identifier. One of the special aspects of the technology is that you get a complete record of every transaction that has ever taken place. With a little forensic talent, it tends to be much easier to trace illicit transactions with virtual currencies than with cash. So in terms of transparency, it stands in the middle between a normal bank transfer and cash, which is truly anonymous.

What is the approach you suggest when it comes to regulating the technology?

The applications of distributed ledger technology, the technology underlying Bitcoin, are not yet taking place on a systemic scale and are still evolving rapidly. At this stage, we shouldn’t stifle innovation with pre-emptive regulation. But given the very rapid evolution in this field, we cannot afford to sit back and wait. Instead, we should establish a task force at the EU level to engage in active and close precautionary monitoring of how applications are evolving so that we are in a position to act swiftly and forcefully if need be before applications are becoming systemic. Also, existing legislation already needs to applied, for example in the area of anti-money laundering.

MEPs approve €11.6m in job-search aid for redundant workers in France and Greece