Since the beginning of the 20th century energy has been a critical factor for armed forces worldwide. From the end of the Cold War to the first year of the 21st century, the U.S. Department of Defense’s (DoD) energy consumption dropped by some 40 percent, but with the Global War on Terror it has started increased again. 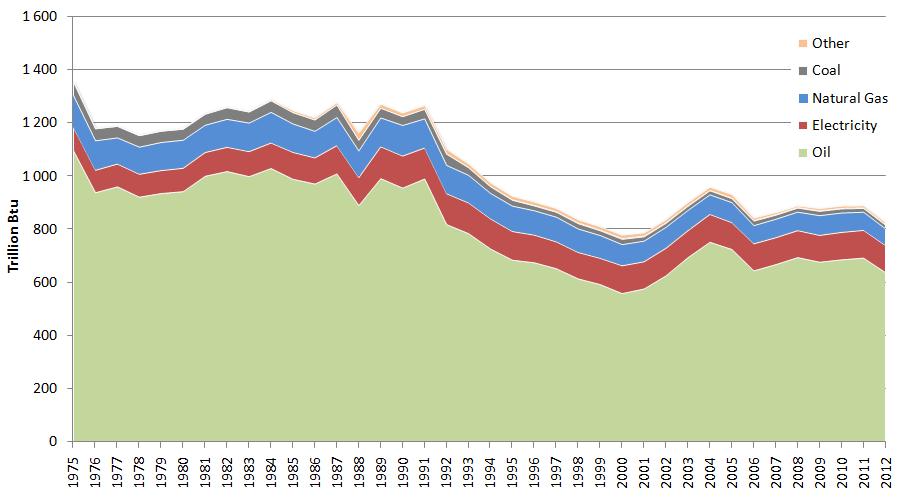 The US Department of Defense Energy Consumption
In fiscal year 2012, the DoD consumed 827 trillion Btu of site delivered energy at a cost of 20.4 billion dollars. While consuming that amount of energy, DoD emitted 70 million metric tons of CO2. And yet, total DoD energy use and costs are higher than those given above simply because the energy use and costs arising from the contractors to support military operations both domestically and abroad are not included in DoD’s data. 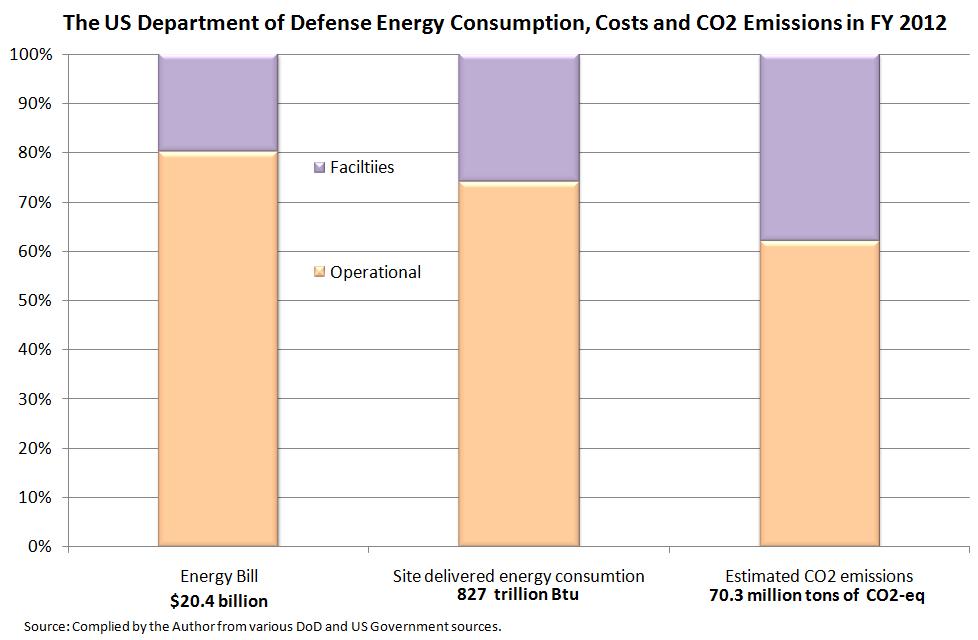 The US Department of Defense Energy Consumption, Costs, and CO2 Emissions in FY 2012
The DoD accounted for around 1 percent of the US energy consumption and 80 percent of the federal government energy consumption. Although this may seem small, the fact is that the Pentagon is the largest single consumer of energy in the World. Nigeria, with a population of more than 160 million, consumes as much energy and emits as much CO2 as the US military.
Operational energy use (the energy required for training, moving, and sustaining military forces and weapon platforms) have accounted for three quarters of the DoD’s total energy use over the past two decades. Oil accounts for virtually all of DOD operational energy consumption. The Air Force is the largest operational energy consumers, accounting for half of the DoD’s total operational energy consumption. It is followed by the Navy (33%) and Army (15%).
Facility energy use (the energy needed to power fixed installations and non-tactical vehicles) has made up the rest. Electricity and natural gas accounts for over 80% of DOD installation energy consumption, mirroring that of the US commercial sector energy supply mix. With its share of 37%, Army is the largest consumer of facility energy, followed by the Air Force (30%) and the Navy (28%).
The U.S. is the strongest military power in the world and just like any other military in the world, energy, in particular energy derived from oil, is at the heart of that power. Oil accounted for almost 80% of total DoD energy consumption, followed by electricity, natural gas and coal in 2012. DOD pays immense effort for reducing its dependency on conventional oil and seeks ways to use alternative and renewable energy sources. Despite all these efforts, only negligible share of the DoD’s total energy consumption comes from renewable sources. 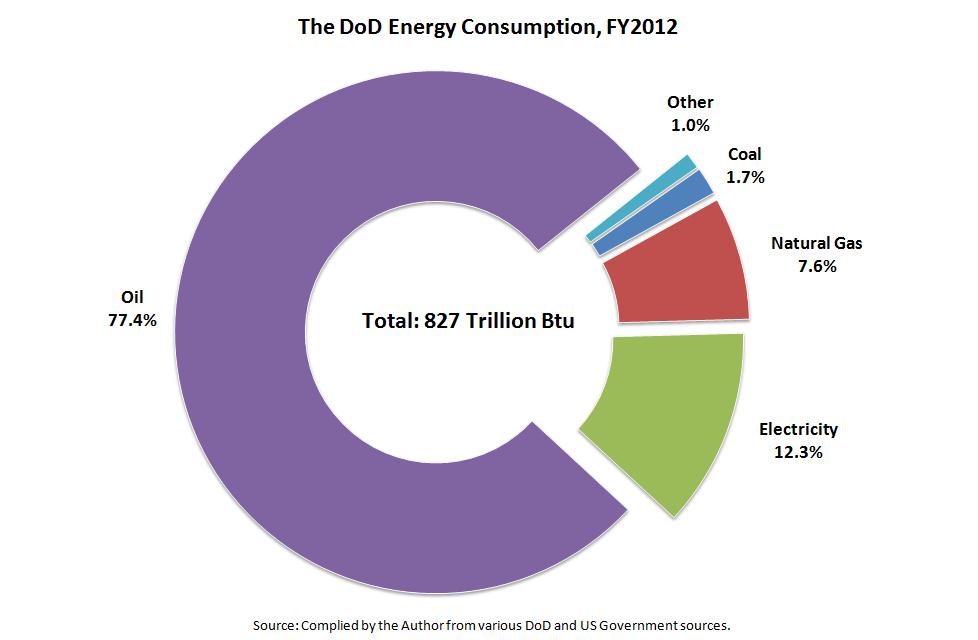 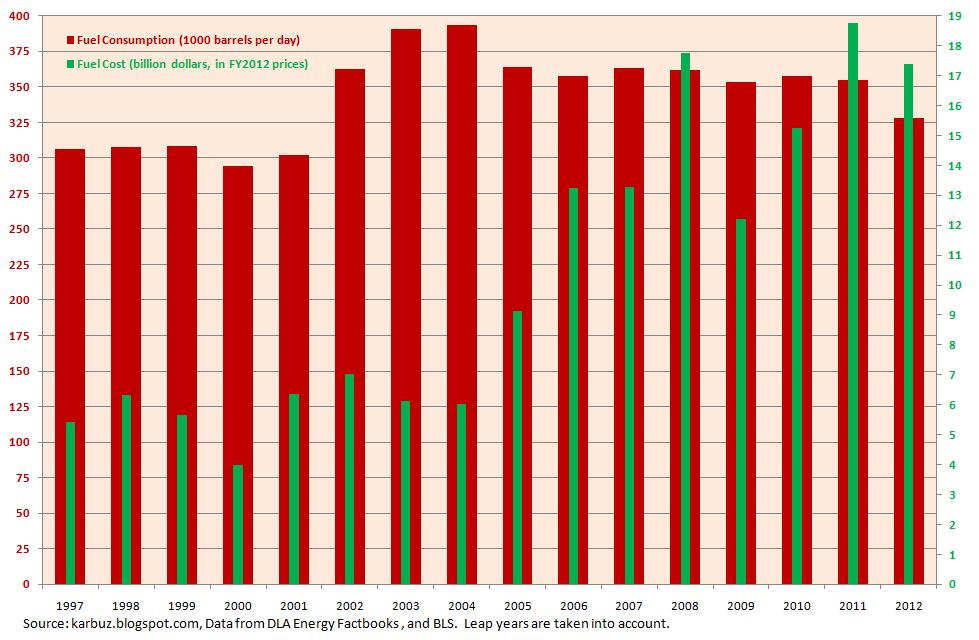 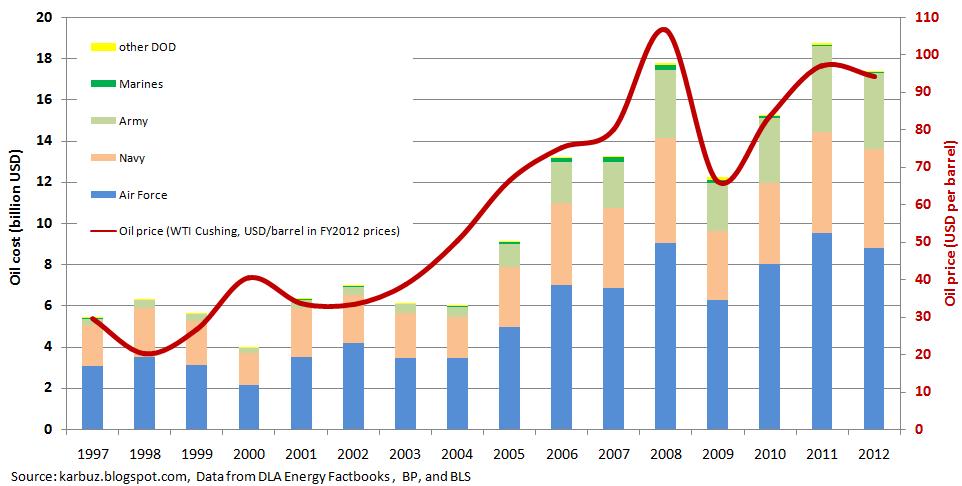 The US Department of Defense Oil Consumption and Costs

The US Department of Defense Oil Cost by Service, and Oil Prices
The military is aware of its dependence on energy in general, and oil in particular. This dependence can lead to financial, operational, and strategic challenges and risks. This is why, energy is considered one of the DoD’s top transformational priorities, and 2010 Quadrennial Defense Review addressed energy for the first time as a strategic issue.
The US military has emerged as the World’s one of the biggest adopters of clean technologies. Although the DoD has already become a leader and promoter in some areas of renewable energy, it is yet to be seen whether it will be able to reduce its energy use, create viable alternatives and wean itself off oil. All the DoD services have already put in place numerous energy related goals, initiatives and strategies, which also pose several potential policy and oversight issues for Congress.