”Today is International Holocaust Remembrance Day, the anniversary of the liberation of the Auschwitz-Birkenau death camp. In April 1944, approximately 1,900 Jews were deported from Athens to Auschwitz-Birkenau. In total, about 59,000 Jews from Greece were murdered during the Holocaust.

There are several monuments to honor victims of the Holocaust throughout Greece – including this one in Athens. Dedicated in 2010, the monument consists of stones laid in the form of a Star of David. Engraved on the stones are the names of Greek towns and cities where Jewish communities were annihilated during the Holocaust. Holocaust survivor and famous author Elie Wiesel wrote these lines especially for the Athens memorial – they are engraved on a plaque at the entrance of the park in 3 languages:

Pause awhile as you pass by,
close your eyes and remember.
Remember the time when here, or near here,
men, women and children – our own fellow creatures – congregated in peace and trust,
only to be arrested, humiliated, deported and murdered in Camps
that shall forever shame our Civilization.
Because they were Jewish, six million people
were denied the right to be free, happy, to hope,
to smile, to pray, and finally, the right to live.
Remember them, their anguish and their death.
Do not recoil at such horror; do not descend into despair at man’s inhumanity to man.
Just remember. For by remembering we honour their deaths,
and we save them from dying again – in oblivion.” 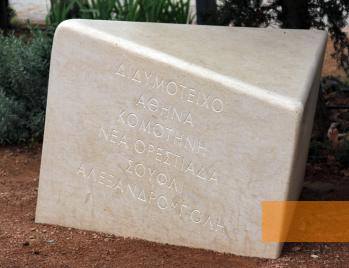