Athens – Eight UH-60 Black Hawk helicopters along with more than 70 other pieces of equipment arrived at the Thessaloniki Port on February 25 as part of the 10th Combat Aviation Brigade (CAB) nine month rotational deployment in support of Operation Atlantic Resolve.  U.S. Army Europe’s preparation for an increased presence across Europe contributes to and strengthens the alliance’s deterrence and defense.  Senior Greek and American officials stressed the importance of the personnel and equipment’s arrival during a stop at the port.

“This is a great opportunity for interactions between Greek and American soldiers in order to develop capacity, share lessons, and hone expertise,” said U.S. Ambassador to Greece Geoffrey Pyatt, who visited the port to observe and talk with U.S. Army and Greek military leaders and soldiers.

Through Operation Atlantic Resolve, U.S. military units are working with NATO allies and partners in Poland, the Baltic states, Bulgaria, Romania and Germany for rotational deployments focusing on training, exercises and maintenance.

This operation is the first time in recent years that the U.S. Army has used the port of Thessaloniki.

“This is great opportunity to enhance our cooperation,” noted Lt. Gen. Alkiviadis Stefanis, Hellenic Army Chief of Staff.  “The Greek position offers stability, and we also offer the Alliance, and the professionalism of our Soldiers. We are very proud to have you here and we are looking forward to enhancing our cooperation.”

Herein for your reference is a press availability transcript:

U.S. Ambassador to Greece, Hon. Geoffrey R. Pyatt:  “This exercise demonstrates the strategic importance of our alliance with Greece and in particular the strategic importance of Greece’s location here.  We’re in Thessaloniki, gateway to the Balkans, a key part of Greece’s status as a Black Sea littoral state and also a city which provides tremendous support to our American alliance here with Greece. This exercise is also an opportunity for us to do what General Stefanis asked me when I first came to Thessaloniki last fall, which is to continue to develop opportunities for interaction between Greek and American soldiers in order to develop capacity, share lessons and hone expertise.

Lt. Gen. Alkiviadis Stefanis, Hellenic Army Chief of Staff:  “We believe that it’s a great opportunity to enhance our cooperation. The Minister of Defense and also the Chief of the Armed Forces is in favor of that and we believe that we will gain in many, many different aspects.  Greece offers the great strategic position and also offers stability.  And they also offer to the alliance, and the professionalism of our soldiers.  So we’re very proud having you here and we are looking forward to enhancing our cooperation.”

Lt. Gen. Ben Hodges, Commander U.S. Army Europe:  “Army aviation is an essential part of the U.S. Army’s ability to deter aggression. The arrival of 10th Combat Aviation Brigade, three airports, three sea ports all around Europe demonstrates, increases our capability which is essential to deterrence.  So that’s the number one point, this is about deterrence.  Number two, it’s about the agility of the United States Army.  This ship and this helicopter came from Fort Drum, New York here to Thessaloniki, Greece and just hours after the aircraft are coming off a ship they’re going to fly away from here and in about three days they’re going to be conducting an air assault operation.  So, to come from Fort Drum, New York and then conduct an air assault operation in Romania in such a short amount of time, that kind of agility is essential to our ability to deter.  And then finally, the alliance.  The most successful alliance in the history of the world.  NATO, the United States, two of the early members of the alliance.  We could not do this if Greece, if the port of Thessaloniki, a gateway into Europe, and then the Hellenic Army would not be possible without our allies enabling us to do this.” 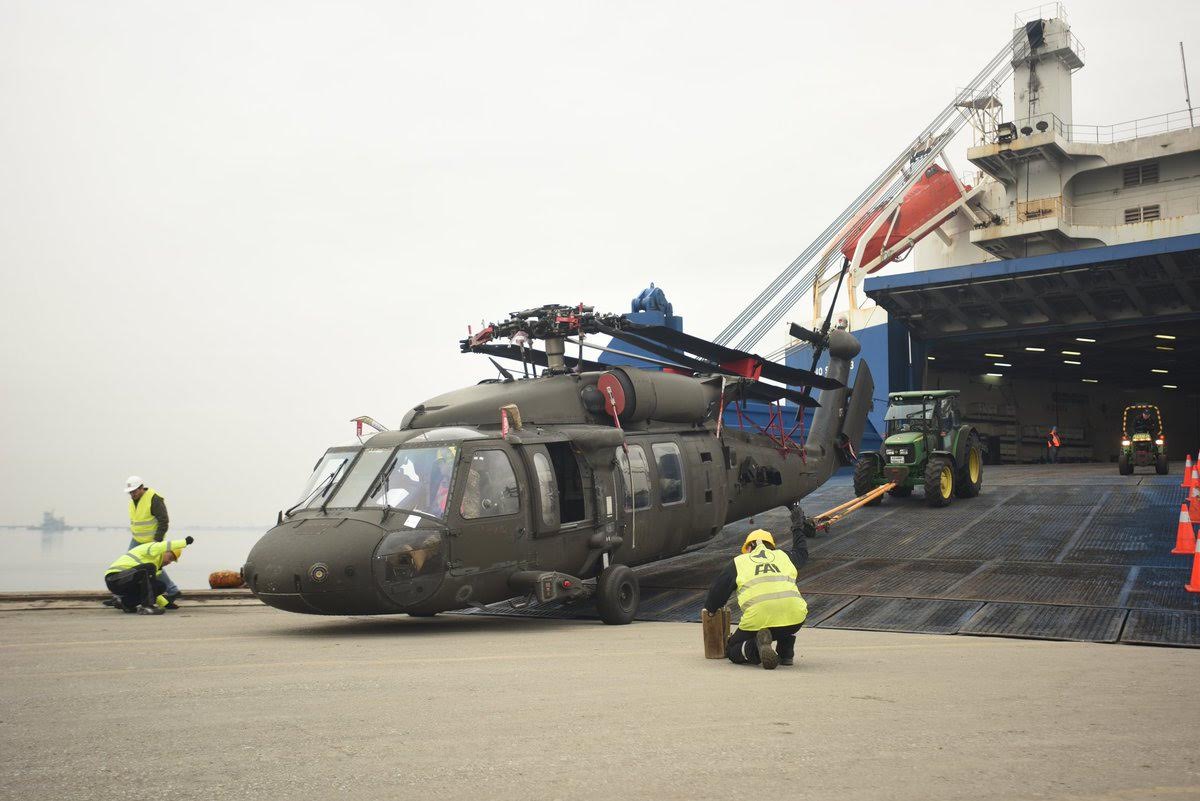 G4 Col. Clair A. Gill Commander 10th Combat Aviation Brigade: “(This is) a complex operation.  We’re using aircraft, we’re using sea lift to move the brigade into the theater.  Every soldier plays a critical part.  Every soldier has a task that’s going to make this successful.  I’m absolutely confident that the training that we’ve done to get here and what we’re going to do this year is really going to enhance the alliance and really make it a great part of the strong Europe team.  I’m excited about what the year has ahead.”

See a time-lapse video from the 10th Combat Aviation Brigade showing the helicopters from roll off to flight here: https://www.youtube.com/watch?v=Yv591CQoWvI&feature=youtu.be