Ambassador Pearce met with Mr. Sokratis Kokkalis, founder and major shareholder of Intracom and Intralot groups and the top management team, and discussed about both groups’ activities around the globe, focusing on more than 20 years of U.S.-Greek commercial relations, which includes Intracom’s strategic cooperation with Raytheon, Boeing, IBM and Oracle among others. 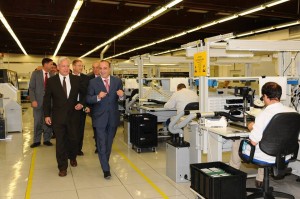 During his visit, Ambassador Pearce visited the technology sites of the Intracom and Intralot premises and learned about the investment and activities of Intralot, which currently holds a 24% market share of the U.S. online lottery systems contracts. Intralot employs 400 technology professionals at its Innovation Center in Athens who support the U.S. operations. Along with the 200 Greek employees working on U.S. contracts at Intracom Defense Electronics, Intracom’s commercial relations with the United States contribute to 600 good jobs for Greeks in support of U.S.-Greek commercial relations.

German School of Athens collects clothes for the Syrian refugees

The start of the EU Relocation Scheme, a symbolic step forward in tackling the ‪refugee crisis‬ (video)