The question of where the Islamic State [IS] acquires its funding has been a subject of much discussion. Though ideological partisans often see a private Gulf Arab funding hand behind IS, the general consensus now seems to accept that IS is not dependent on foreign donors in any meaningful way, and thus largely acquires its revenues from resources within the territories it operates, including taxation, sales of oil and gas, antiquities and the like. Thus, the majority of the debate now focuses on trying to determine the relative importance of each of these sources of revenue.
A number of analyses have been produced relying on local sources within Iraq and Syria, and in this regard I highly recommend Die Zeit’s investigation from December 2014, the fruit of a team of researchers including my colleague Yassin Musharbash.

However, a deficiency in all the work thus far on IS finances is a lack of statistics from IS itself on income and expenditures, and so a degree of guesswork in estimating has always been involved. The exclusive documents that will be presented below- obtained from IS’ Diwan Bayt al-Mal (financial ministry) in eastern Syria’s Deir az-Zor province (Wilayat al-Kheir)- provide a remedy in giving a first time view of IS budgets by its own account for the month of Rabi’ al-Awal 1436 AH (c. 23 December 2014-22 January 2015).
For context, Deir az-Zor province has been almost entirely under the control of IS since July 2014, while a regime presence still holds out in parts of Deir az-Zor city and at a military airport. In defeating the rebels in Deir az-Zor province, IS has gained a monopoly on oil and gas resources in the province. The province’s long-standing importance to the oil and gas sector of the Syrian economy is well-known, and it undoubtedly constitutes the largest pool of oil and gas resources in Syria that IS has been able to exploit.
As part of its narrative of ‘breaking the borders’ between Syria and Iraq, IS created a ‘Euphrates Province’that spans eastern Deir az-Zor province and western Anbar province, including the districts of Albukamal in Syria and al-Qa’im, Rawa and Anah in Iraq.
Figures in the documents help us to quantify IS financing. From IS’ richest province in fossil fuels, revenues and expenditures for the province come in the form of millions of dollars on a monthly basis, not tens or hundreds of millions. Further, despite the significant holdings of oil and gas resources, these sources of revenue by no means constitute the majority of IS’ income in the province. Statistically, revenue streams for the province can be divided as follows using the data from the documents:

As can be seen, a plurality of the income actually comes from confiscations of property and money. This may take place for a number of reasons: e.g. residents who fled their homes, violations of IS regulations and illicit smuggling of goods, particularly forbidden items like cigarettes and alcohol. Movement across border areas is important in this regard when combined also with transit fees for legitimate travel and transportation of goods.
Meanwhile, IS’ expenditures primarily go towards military upkeep in the form of expenditures for bases and paying fighters’ salaries. Conspicuously absent from the expenditures are accounts for salaries of workers officially under the authority of the Diwan al-Ta’aleem (education). The reason for this is that the IS process of revamping the education system in accordance with its ideology required the closing of many schools in this period to subject teachers and staff to ‘repentance’ and Shari’a lessons, while the regime continued to pay salaries though under strict conditions for the recipients to come in person to the relevant places stipulated by the regime. Note that the Islamic Police comes under the Diwan al-Hisba working closely with IS’ judiciary department (Diwan al-Qada wa al-Mazalim), and both these diwans play key roles in confiscations of goods and property. Here is the breakdown of expenditures by percentage.

Some more points of analysis to consider:

Below are the documents with translation. 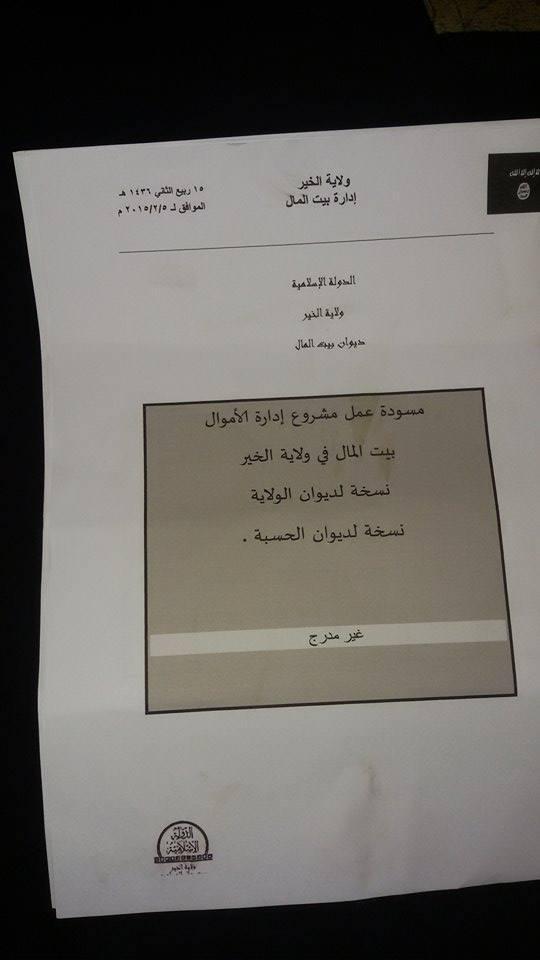 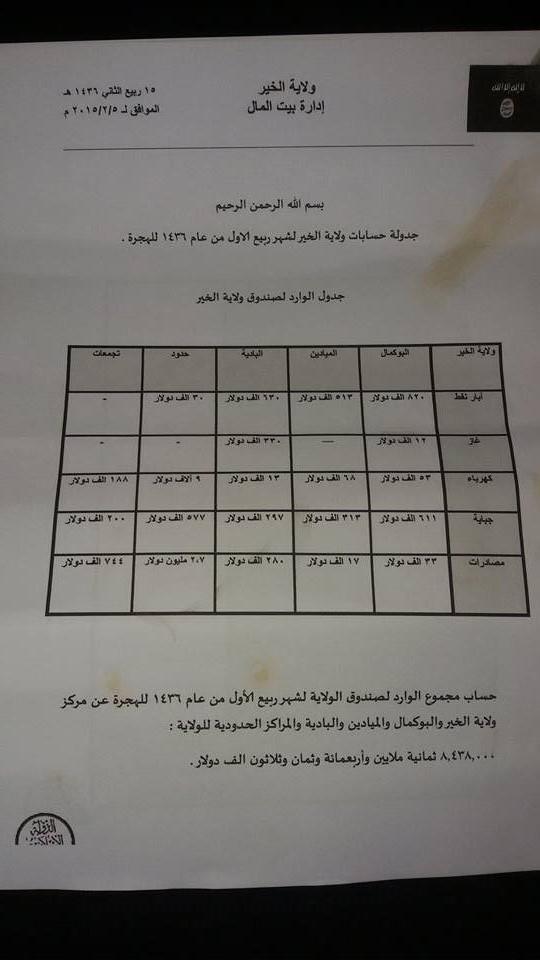 In the name of God, the Compassionate, the Merciful
Table of accounts for Wilayat al-Kheir for the month of Rabi’ al-Awal of the year 1436 AH
Table for income to the treasury of Wilayat al-Kheir.
Wilayat al-Kheir Albukamal Al-Mayadeen Al-Badiya Borders Tajammu’at [Deir az-Zor area residential districts]

Total accounting of income for the treasury of the Wilaya for the month of Rabi’ al-Awal of the year 1436 AH from the centre of Wilayat al-Kheir, Albukamal, al-Mayadeen, al-Badiya and the border centres for the Wilaya is $8,438,000. 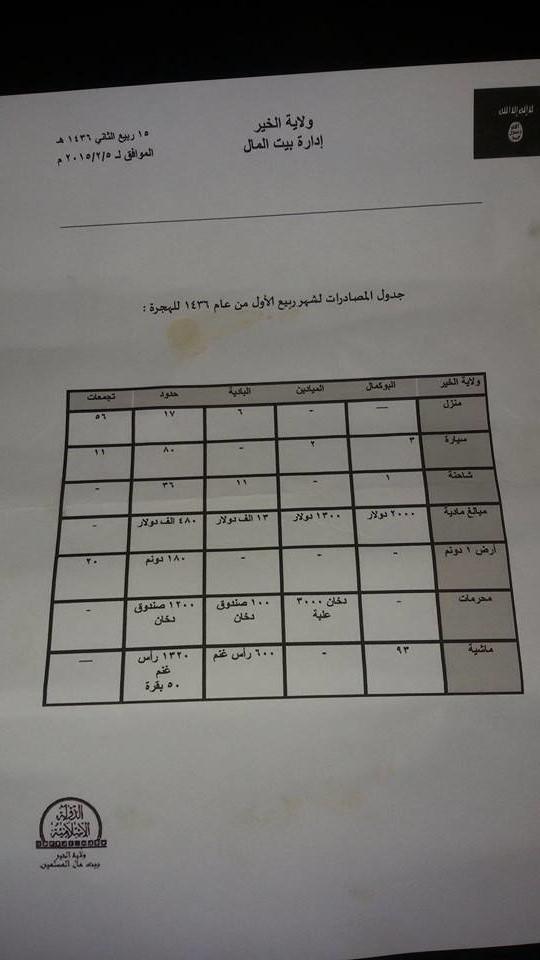 In what follows is a table of expenditures for Wilayat al-Kheir for the month of Rabi’ al-Awal of the year 1436 AH: 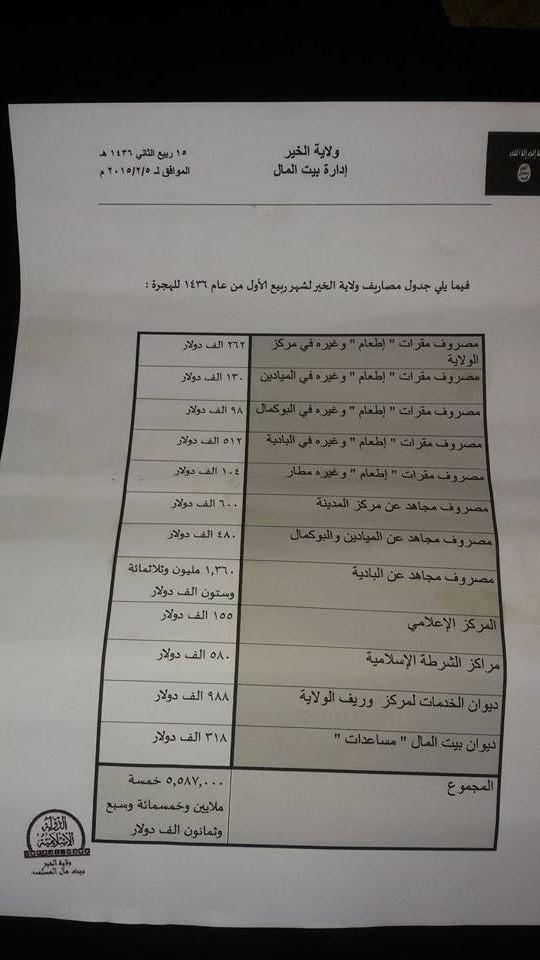 Zakat taxes in Wilayat al-Kheir for the month of Rabi’ al-Awal of the year 1436 AH: 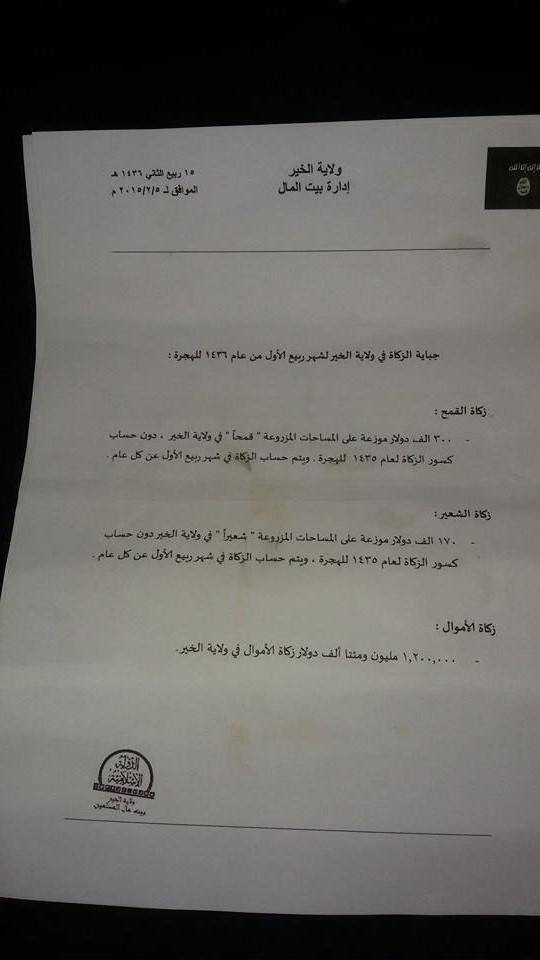 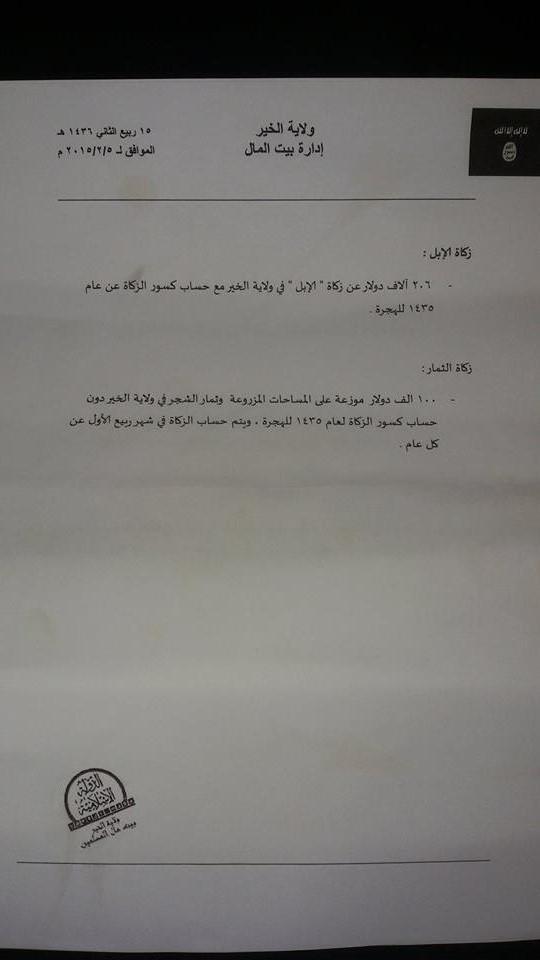 *[Note: According to Rashad Ali further the kusur of zakat is that which is not obliged/charged for zakat taxation, as it falls below minimum threshold for mandatory zakat taxation].