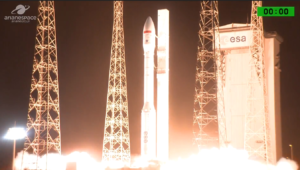 Having launched its second satellite into orbit, along with other world megaprojects, the traditional North African kingdom, has leapfrogged the technological gap to become one the pioneering countries in the whole Continent in terms of modern innovation
The satellite is named after the King himself, who since his ascension to the throne in 1999 has inspired a vision of gradual mutation, pushing his kingdom to embrace modernity while preserving its core millennial traditions and values.

The “Mohammed VI-B” joined yesterday its sister identical satellite “Mohammed VI-A” launched one year ago. Both components are designed for civil use, such as mapping and land surveying, regional development, agricultural monitoring, the prevention and management of natural disasters, monitoring changes in the environment and desertification, and border and coastal surveillance.

In fact, Morocco has its own spatial program which started in 2013. The achievement of this program, spreading over 5 years, has been entrusted to a consortium made up of the Thales Alenia Space as system prime contractor and Airbus as co-prime. With this second satellite, the kingdom will become the third country on the African continent to be endowed with these technologies, after Egypt and South Africa, but the first on the continent to deploy twin satellites.

King Mohammed VI and Marcon kicking off the “TGV” 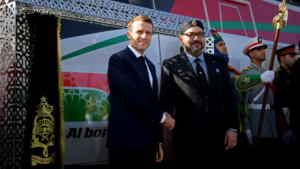 Morocco is also home to the largest solar energy production site in the world, situated near the well-known and beautiful city of Ouarzazate, called the Hollywood of Africa as big movies such as “Games of Thrones” were shot therein. The solar power station named ”nour” is part of bigger project which aims at honouring the ambitious engagement of Morocco to become a world leader in renewable energy sources. Thanks to this project, Europe also will be provided with clean and efficient energy in the nearest future. 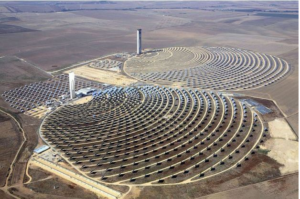 In terms of foreign investments, the country is being more and more attractive to world biggest companies thanks to its world class infrastructure; its strong and stable macroeconomic performances as well as it qualified Labour force. Rabat has indeed put in place a whole plan to adapt its educational system to the market place and promising sectors, such as car and aerospace industries.

As far as social progress is concerned, the King has launched in 2005 the National Initiative for Human development aiming at addressing the social deficit urban slum and rural communities most in need, encouraging income-generating activities and responding to the essential needs of  people in difficult situations.

A Poet of Computation Who Uncovers Distant Truths

A European intelligence school led by Greece and Cyprus?