Norway has become the pioneer in the use of electric cars. The country is already winning the race compared to other countries. What ‘s the secret?

The trick, it seems, is setting high vehicle taxes and offering generous exemptions.

By stripping electric cars of a 25 percent sales tax and a registration tax that averages more than $12,000 depending on a vehicle’s weight and polluting fossil fuel emissions, the Nordic country has zoomed past its original projections for swapping out its gas-burning fleet for electrics, according to a report published Friday in The New York Times.

Norway expected 50,000 of the country’s 2.5 million registered private vehicles to run on electricity by 2017. Instead, it hit 66,000 last month, in addition to 8,000 gasoline-electric hybrids.
But what’s most impressive is how Norway powers those electric vehicles: gushing rivers. Over 95 percent of the country’s electricity is produced by hydropower, according to 2011 data from the Norwegian Water Resources and Energy Directorate, a government agency. 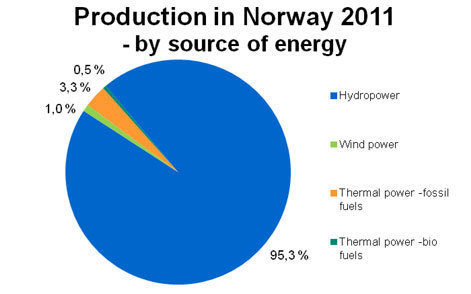 As David Jolly wrote in the Times:
That makes Norway’s electricity cleaner and relatively cheap — a further impetus for adopting e-cars. (A country where much of the electricity is generated by coal-fired power plants would not see as many environmental benefits from switching to electric vehicles.)

And all that despite the fact that fossil fuels have enriched Norway. The country — which is not part of the European Union and uses its own currency, the krone — is the world’s seventh-largest producer of oil and third-biggest natural gas exporter.

The issue with electric cars in the United States is they suck energy from a grid powered by burning fossil fuels. That increases their carbon footprint. Considering electric cars are meant to reduce global emissions and combat climate change, that’s a problem.

In contrast with Norway, hydropower made up just 6 percent of U.S. electricity production last year, according to the U.S. Energy Information Administration. Coal accounted for 39 percent, and natural gas hit 27 percent.

The European Commissioner for Regional Policy, Corina Cretu, at Bedestan in Nicosia (photos)