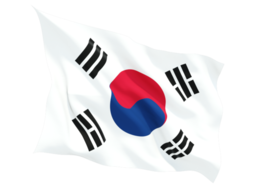 Greece has traditionally enjoyed good relations with South Korea, which is particularly appreciative of our involvement in the Korean War (1950-1953). The 60th anniversary of the outbreak of the Korean War was marked by commemorative events in Athens and Seoul in 2010.
These historical-political aspects of our bilateral relations extend into our major economic cooperation, with emphasis on shipbuilding in South Korean shipyards and the commercial success of South Korean hi-tech products in Greece.

Greek-South Korean cultural relations are regulated by the Cultural Agreement signed on 28 February 1967, which is implemented via three-year Cultural Programmes. At the private University of Hankuk, there is a Greek and Bulgarian Studies Department with a four-year programme of studies covering – in addition to Modern Greek – Greek history and literature. The University of Athens has signed cooperation agreements with four South Korean universities.
The Greek community in South Korea consists of seasonal personnel involved in work on Greek-owned ships at the shipyards of Ulsan, Pusan and Mokpo. The Orthodox Metropolitanate of Korea maintains seven churches and one convent.

Embassy of South Korea in Greece