While most of the new wave of violence has taken place in the West Bank and East Jerusalem, at the time of the survey, residents in these areas were less likely (27%) than those living in the Gaza Strip (39%) to believe in violent solutions to the conflict. West Bank and East Jerusalem residents (43%) were also less likely than Gaza residents (65%) to describe relations between Israelis and Palestinians as “very bad.” And they were less likely than Gaza residents to say relations are getting worse, although majorities in the West Bank/East Jerusalem as well as Gaza share this pessimism. 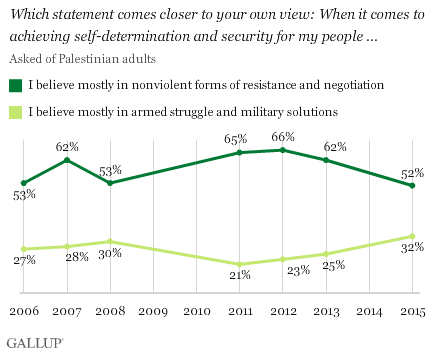 Despite the perpetual nature of the conflict, well into its seventh decade, more than one in six (17%) Palestinians still have not given up hope that a permanent peace between Israel and the Palestinian Territories will one day be achieved; however, the vast majority (73%) do not think so. Palestinians in all areas are pessimistic about peace prospects, but Gaza residents are even more dour (81%) than those living in the West Bank and East Jerusalem (69%). 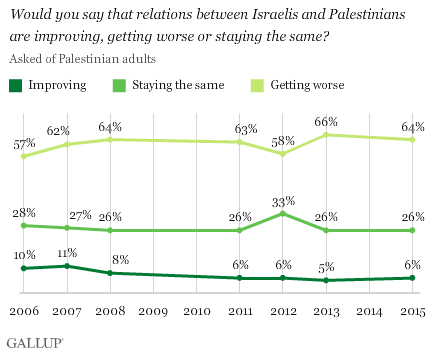 Seventy-Five Percent Have No Confidence in Obama to Negotiate Peace Deal
As far back as, if not before, U.S. President Barack Obama’s well-publicized Cairo speech in 2009, when he advocated a two-state solution, few Palestinians have had confidence in Obama to negotiate a fair peace deal. This lack of confidence has only grown in recent years. In 2015, a record 75% of Palestinians said they had no confidence at all that Obama could negotiate a deal. The Obama administration has recently acknowledged that a two-state solution is “not in the cards” during the remainder of Obama’s term and that there are no plans to resume negotiations. 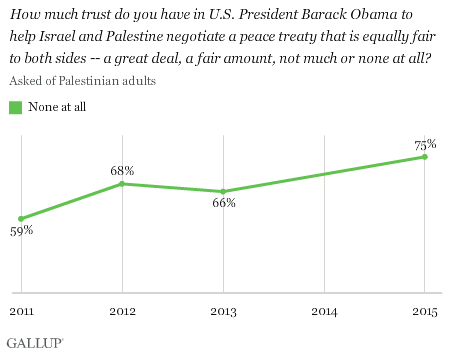 No more than 3% of Palestinians have ever viewed Obama very favorably or favorably. At the same time, Palestinians also have limited confidence in their own leadership as an avenue for solutions. A slim majority (53%) rate Palestinian President Mahmoud Abbas favorably or very favorably, and less than half have favorable opinions of Hamas politician Ismail Haniyeh (44%) or Prime Minister Rami al-Hamdallah (41%). 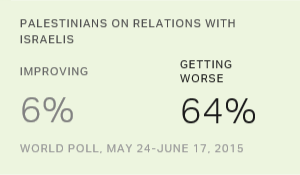 Implications
After repeated reminders over the years that the festering Palestinian-Israeli conflict requires more serious efforts from the U.S. and the international community to reach resolution, the deadly violence in East Jerusalem is a reminder that the problem has not gone away. The conflict in the Palestinian Territories struggles to compete for international attention with events in Syria and Iraq. Left to their own devices, Palestinians and Israelis appear to be locked in an increasingly deadly spiral.