Secretary General for International Economic Relations, Mr. George Tsipras, participated as speaker at the event “Iraqi Kurdistan and Regional Dynamics: Interaction and prospects with Greece”, organized by the Institute of International Economic Relations, on the occasion of the visit to Greece by Mr. Falah Mustafa Bakir, the Head of Foreign Relations Local Government of the Autonomous Region of Iraqi Kurdistan (YPE, 10.29.2015).

In his intervention, Mr. George Tsipras, referred to the potential function of Greek businesses in Northern Iraq and he also refered indicative areas where there are opportunities and prospects, since the two economies can be complementary. Mr. Tsipras stressed that this region is rich in oil deposits and that because of its geographical location the area has become a commercial hub, knowing remarkable growth in recent years.

Finally, theSecretary General for International Economic Relations assured the audience that the Foreign Ministry and the General Secretariat of International Economic Relations support promotional efforts of economic and trade cooperation with the Autonomous Region of Iraqi Kurdistan, with the Central Government of Iraq and the wider Middle East. 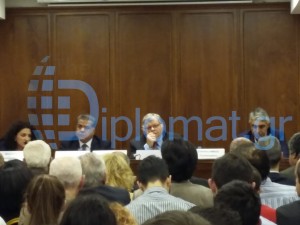 The Juncker Commission: One year on