Russia’s Defense Ministry announced yet another realignment of the commanders leading the war in Ukraine on Wednesday, as criticism mounts over its handling of the stalled campaign. 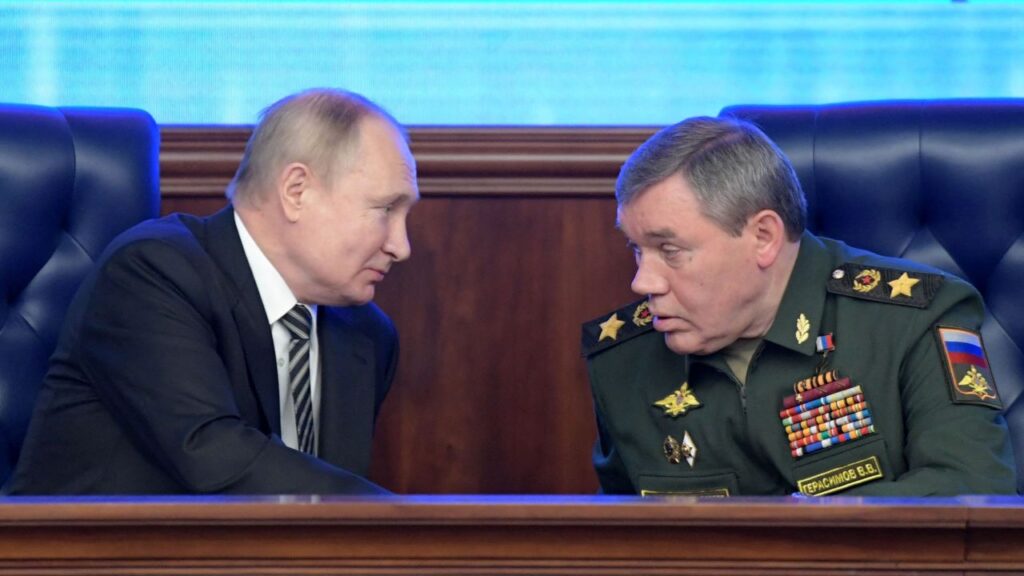 The ministry said that General Valery Gerasimov, chief of the Russian General Staff, would become the overall commander of the campaign, with the current commander, Sergey Surovikin, becoming one of his three deputies.

Surovikin was only appointed as the overall commander of what the Kremlin euphemistically calls the “Special Military Operation” in October.

In terms of the bureaucratic hierarchy, the announcement is hardly an upheaval. Surovikin already reported to Gerasimov.

“Generals are moved, shuffled from the Front to the Headquarters. From Headquarters to the Front,” Russian television commentator Sergey Markov said Wednesday on Telegram.

“Surovikin is not punished and Gerasimov is not punished. It’s all one team. Well, of course with competition, which always happens among the top dogs.”

But the decision puts Gerasimov, who has been chief of the General Staff for more than a decade, closer to direct supervision of the campaign – and to responsibility for it. While Gerasimov was a key figure in planning the invasion, he appears to have been at arm’s length since, with just one reported visit to the command of the campaign inside Ukraine, though the Defense Ministry did not confirm that either.

Mark Galeotti, senior associate fellow with the Royal United Services Institute, said “it is a kind of demotion [for Gerasimov] or at least the most poisoned of chalices. It’s now on him, and I suspect Putin has unrealistic expectations again.”

Gerasimov has sometimes gone weeks without public appearances and was not seen at the Victory Day parade in Moscow last year, which at the time led to speculation about his position.

He now combines direct command of the Ukraine campaign with that of chief interlocutor with the United States on issues such as military “de-confliction.”

He last spoke with the Chairman of the US Joint Chiefs of Staff, General Mark Milley, in November after a Ukrainian air defense missile landed in Poland.

Just why the Russian Defense Ministry has made this move at this moment is unclear. It said there was a “need to organize closer interaction between the branches and arms of the Armed Forces” and improve the support and effectiveness of “command and control of groupings of troops.”

The new structure implies that Gerasimov’s seniority will improve coordination in a campaign where different branches of the armed forces have frequently seemed less than synchronized.

Some analysts believe the move may also be an attempt by the ministry to exert tighter control over the campaign ahead of a critical few months in which the remainder of the reserve force mobilized in the autumn of 2022 will be deployed after training.

The Ukrainian military has said it expects a fresh Russian offensive in the early spring. The overall military commander in Ukraine, General Valery Zaluzhny, told The Economist in December: “They [Russian forces] are 100% being prepared.”

A major Russian attack could come “in February, at best in March and at worst at the end of January,” he said.

Rob Lee at King’s College London tweeted that Wednesday’s announcement “reasserts the MoD’s position overseeing the war… this may also partially be a response to Wagner’s increasingly influential and public role in the war.”

Wagner’s boss, Yevgeny Prigozhin, has been both vocal and visible on the front lines, as his contract fighters have been prominently involved in the assault on Soledar in the eastern Donetsk region. He has repeatedly said that Wagner mercenaries fighters are exclusively responsible for advances in the Soledar area.

There’s been a long history of tension between Prigozhin and Russian Defense Minister Sergey Shoigu. But Prigozhin has praised General Surovikin for managing an orderly withdrawal of Russian forces in the southern Kherson region, as their position became less and less tenable.

Wagner Group head Yevgeny Prigozhin attends the funeral of Dmitry Menshikov, a fighter of the Wagner group who died during a special operation in Ukraine, at the Beloostrovskoye cemetery outside St. Petersburg

In November, Prigozhin said on his Telegram channel: “Generals have to win victory after victory every day. To whom can Surovikin be compared? Surovikin is honest and principled, he is trusted by the army.”

Some commentators wonder whether the ministry is “circling the wagons” as criticism persists of its handling of the campaign. Wednesday’s announcement follows news that the man who lost his job as commander of the Central Military District in October, Colonel-General Aleksandr Lapin, had been appointed Chief of the General Staff of the Ground Forces, according to state news agency TASS.

Both Prigozhin and Chechen leader Ramzan Kadyrov singled out Lapin for criticism. “It’s not just that Lapin is worthless. It’s the fact that he is covered at the top by the leaders in the General Staff,” Kadyrov wrote on his Telegram channel in October last year.

It is inconceivable that Gerasimov’s appointment would have occurred without President Vladimir Putin’s approval and more likely his order. If Gerasimov turns the tide of the war, it will look like a brilliant move. If he fails, then he will take the blame.

‘Hanging by a thread’
A Russian military analyst who blogs under the pseudonym ‘Rybar,’ and has more than a million followers on Telegram, does not expect the shake-up to be successful – suggesting it’s hoping for “a miracle in the 11th month of the special operation.”

“The sum does not change by moving around its parts,” Rybar wrote.

Dara Massicot, a senior researcher at the Rand Corporation, says the Ministry of Defense is “demoting their most competent senior commander and replacing him with an incompetent one. This is a story that has it all: infighting, power struggles, jealousy “

She says that while Surovikin committed no strategic blunders, Shoigu and Gerasimov are to blame for the poor planning of the campaign. “They flunked it. They signed off on a secret plan, multiple bad assumptions, didn’t tell the majority of their troops. [It] led to big casualties and a partially broken force,” Massicot tweeted.

Ukrainian soldiers watch as smoke billows during fighting between Ukrainian and Russian forces in Soledar,
Why is Russia so keen to capture the town of Soledar?

Galeotti says Gerasimov is “hanging by a thread”, tweeting: “I don’t think this is intended to create a pretext to sack him as the war is too important and Putin can sack who he wants. But he needs some kind of win or a career ends in ignominy.”

Gerasimov is 67 years old and was appointed by Putin in 2012. He gained a profile among western analysts after a speech that was reported in the Russian newspaper Military-Industrial Courier.

Gerasimov said the use of propaganda and subversion meant that “a perfectly thriving state can, in a matter of months and even days, be transformed into an arena of fierce armed conflict, become a victim of foreign intervention, and sink into a web of chaos, humanitarian catastrophe, and civil war.”

The arrival of Russia’s “little green men” on the Ukrainian peninsula of Crimea in the spring of 2014 was seen as a successful example of this approach, sometimes dubbed “hybrid warfare.”

Galeotti says that “what Gerasimov was talking about was the use of subversion to prepare the battlefield before intervention, precisely the kind of operations used in Ukraine [in 2014]. Breaking the chain of command, stirring up local insurrections, jamming communications — these are all classic moves that hardly began in Crimea.”

But now General Gerasimov has to run a real war.

What does the Shanghai Cooperation Organisation summit mean for Europe?