On October 27, 9 weeks after Oleh Sentsov and Olexander Kolchenko were sentenced by a Russian military court to 20 and 10 years respectively, the Ukrainian Foreign Ministry has presented the project «Freedom» in support of Oleg Sentsov and other Ukrainian political prisoners in Russia.

The installation FREEDOM – the director’s chair, created by Ukrainian studio «llil Design» was presented in front of the Foreign Ministry’s premises for foreign delegations. The project is dedicated to Oleh Sentsov, Ukrainian film director illegally detained in the Russian Federation. Director’s chair for Oleg Sentsov will remind foreign visitors in the Ministry about the necessity to make every effort to release Oleg Sentsov and other Ukrainian political prisoners in Russia. There is a board with the project description in Ukrainian and English near the chair:

«This is a director’s chair for Oleg Sentsov, a Ukrainian film director. He was kidnapped from the territory of Ukraine in May 2014 and has been illegally detained in Russia ever since. On 25 August 2015, a Russian kangaroo court sentenced Oleg to 20 years in prison on fabricated charges of terrorism. Oleg Sentsov is an artist who should sit on this director’s chair and not in a Russian prison.»

The project was presented by Ambassador-at-Large for Strategic Communications of the Ukraine MFA Dmytro Kuleba and founder of the studio «llil Design» Dmitry Alliluev.

This installation is an act of public diplomacy. This is another effective way to draw the attention of our international partners to the problems of Ukrainian political prisoners in Russia and motivate them to take additional steps for their release, Dmytro Kuleba said. 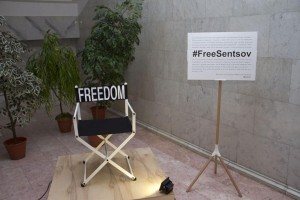 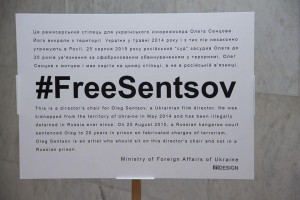 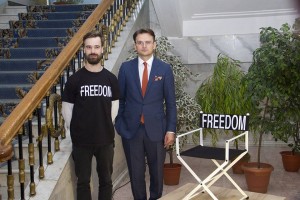 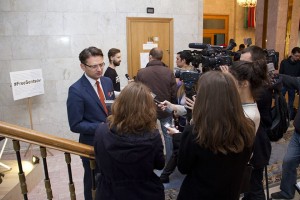