On January 25, 2017 Extraordinary and Plenipotentiary Ambassador of the Kingdom of Morocco to the Hellenic Republic Mr. Samir ADDAHRE presented Letters of Credence to the President of the Hellenic Republic H.E. Mr. Prokopis PAVLOPOULOS during an official ceremony which took place at the Presidential Palace in Athens.
After the ceremony, President PAVLOPOULOS received Ambassador ADDAHRE in his office and during their discussion he congratulated Mr ADDAHRE and wished him success in promoting the Moroccan-Greek relationship.
During this interview, the Hellenic Head of State requested Ambassador ADDAHRE to convey to His Majesty Mohammed VI the King of Morocco, his respect and deep esteem, and to the Moroccan people his wishes of Peace and prosperity. He also expressed his admiration for the process of reform and modernization undertaken in Morocco. 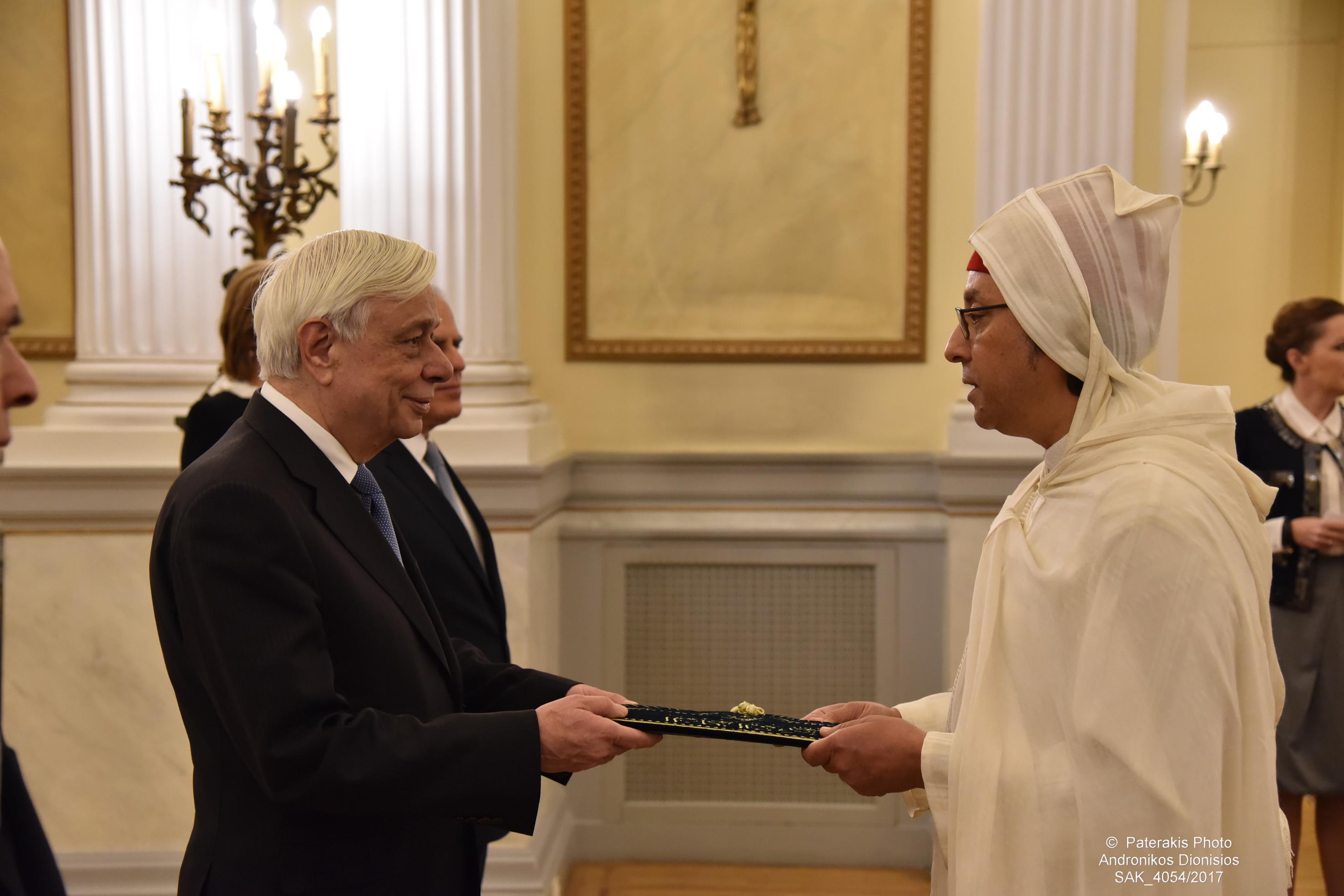 His Excellency PAVLOPOULOS expressed at this occasion the willingness of the Greek side to the comprehensive development of bilateral relations, stressing its interest in further expansion of politic and economic ties as well as cooperation on the migration issue. The President PAVLOPOULOS commanded the partnership between Morocco and the European Union and called for its further deepening.
Ambassador ADDAHRE in his reply speech to President PAVLOPOULOS stated that his appointment to the Hellenic Republic – a country with a rich history and great cultural heritage – is an honour and further responsibility.
H.E. Mr ADDAHRE expressed his gratitude to the Greek authorities and People for continuing their effort to promote traditional cooperation and friendly relationship between the two countries. He also pointed out the possibility of the intensification of contacts at the highest level in order to improve bilateral cooperation.
The Moroccan Ambassador also underlined the importance of shared values such modernity, democracy and tolerance that still drive the Moroccan Project of Society especially in its international relationships.
This opportunity was finally taken by Ambassador ADDAHRE to inform The President of the Hellenic Republic regarding the role that plays Morocco in Africa in the light of the on-going process of Morocco’s return to the African Union.

The Embassy of the Republic of Korea hosted an event called “K-Wave Night” on Friday, 16 November 2016.