It was a rare embrace between one of Israel’s most controversial politicians and an Arab ambassador. Itamar Ben Gvir and the United Arab Emirates’ Ambassador to Israel Mohamed Al Khaja clutched each other’s hands in a warm greeting in Tel Aviv in early December. 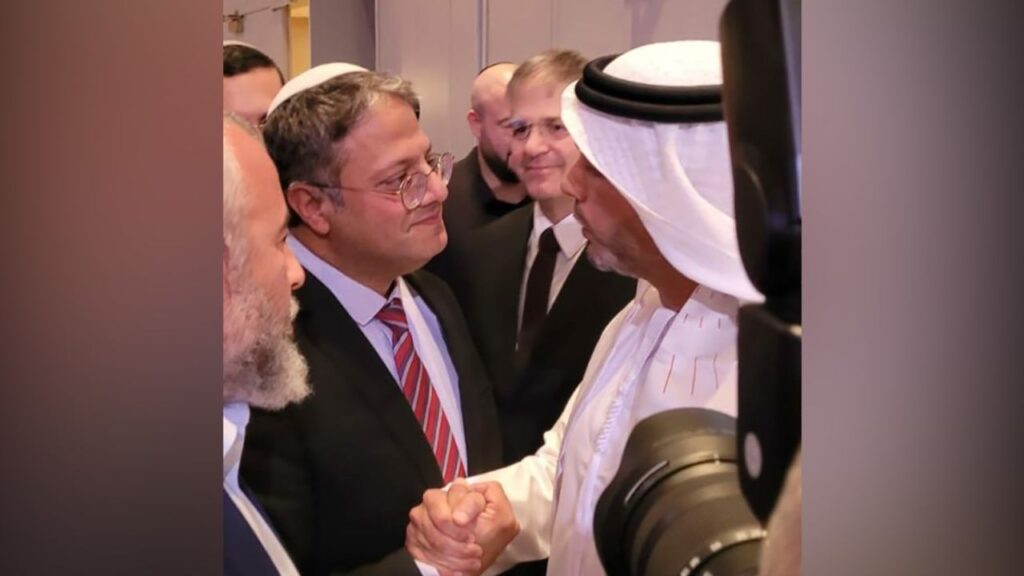 “Birds of a feather flock together,” wrote a columnist in Israel’s left-leaning Haaretz newspaper, arguing that the Abraham Accords, which saw Israel gain recognition from four Arab states including the UAE in 2020, did little to moderate Israel’s position on the Palestinians. Ben Gvir, he said, was “a superstar in the UAE.”

Israel on Thursday swore in what is likely to be the most right-wing government in its history, led by six-time Prime Minister Benjamin Netanyahu. Ben Gvir, an extremist who has been convicted for supporting terrorism and inciting anti-Arab racism, became national security minister. Bezalel Smotrich, who supports abolishing the Palestinian Authority and annexing the West Bank, became finance minister.

Both politicians were invited to national day celebrations in December hosted by the UAE and Bahrain, which were among the nations that normalized relations with Israel, along with Morocco and Sudan in 2020.

“The Emirates are here to show that unity equals prosperity,” Al Khaja was cited by the Times of Israel as saying at his country’s national day celebration, where he was photographed with Ben Gvir. “We will continue to use diplomacy to deepen connections through friendship and mutual respect.”

The public embrace of figures that are hated in the Arab world – and are divisive within Israel itself – is a rare gesture on the part of Arab states that have normalized relations with Israel.

Egypt and Jordan, who recognized Israel in 1979 and 1994 respectively, have had what observers have called a “cold peace” with Israel.

In his phone call to congratulate Netanyahu on returning as prime minister, Egyptian President Abdel Fattah el-Sisi “emphasized the need to avoid any measures that would lead to tension and complicate the regional situation.” Jordan’s King Abdullah II warned in a CNN interview last month that his nation was “prepared” for conflict should the situation change at Jerusalem’s al-Aqsa mosque, of which he is the custodian.

The rightward direction of Israeli politics puts Israel’s new Arab partners in an awkward position regarding the Palestinian cause, which remains a central issue among Arab publics.

“It is awkward not just for us (in the UAE), but for everybody, in America, and all over the place,” Abdulkhaleq Abdulla, a political science professor in the UAE, told CNN. “It is a dilemma, but the way to deal with it is just to wait and see.”

An opinion poll by The Washington Institute for Near East Policy in July 2022 showed that support for the Abraham Accords had dropped in Gulf countries to a minority view, including the UAE and Bahrain, where more than 70% of the public views the agreement negatively. The data however also showed that around 40% of people in Saudi Arabia, the UAE and Bahrain support maintaining business and sporting ties with Israel.

The normalizing states appear to be cognizant of that. On Friday, all four Arab states continued the tradition of supporting the Palestinians at the United Nations by voting at the General Assembly to seek the International Criminal Court’s opinion on the legal consequences of Israel’s occupation of Palestinian territories. Netanyahu called the vote “despicable.”

But Israeli media has reported that behind the scenes, the Emiratis have also been sending messages of concern to Netanyahu about the inclusion of extremists in his government. Ahead of the Israeli elections, UAE Foreign Minister Abdullah Bin Zayed warned Netanyahu against including Ben Gvir and Smotrich in his government, the Times of Israel reported, citing a senior official. Axios, which first reported the news, said Netanyahu didn’t respond.

The move would be a rare case of one of Israel’s Arab partners showing a preference for the country’s domestic politics.

Israeli analyst Zvi Bar’el wrote in Haaretz that the December move to embrace Ben Gvir may have been linked to Abu Dhabi’s desire to steer Israeli policy, adding that it made the UAE “the Arab country with the greatest influence on the new Israeli government.”

The effectiveness of the UAE’s diplomacy within Israel remains to be seen. So far, Israel’s extremist minister seems unrestrained.

Less than a week since he was sworn in, Ben Gvir made a controversial visit to the al-Aqsa mosque compound escorted by Israeli police on Tuesday. The mosque, which lies in Israeli-occupied East Jerusalem, is in an area known to Muslims as Haram al-Sharif. It is the third holiest site for Muslims and the holiest for Jews, who know it as the Temple Mount. Under current arrangements, non-Muslims aren’t allowed to pray there and Ben Gvir wants to change that.

The UAE “strongly” condemned Ben Gvir’s visit without naming the minister, and called for the need to respect Jordan’s custodianship of the holy site. It later joined China in calling for an urgent meeting of the UN Security Council on the matter.

“However unhappy they (Bahrain and the UAE) might be towards the emergence of Israel’s most right-wing government, it’s clear that they’ve chosen to air these concerns privately, and have stopped short of letting them stand in the way of what they see as an important strategic relationship,” Elham Fakhro, a research fellow at the Centre for Gulf Studies at the University of Exeter, England, told CNN.

But the UAE has said earlier that the more friendly ties with the Arab world weren’t a green light for Israel to expand its territory. In June 2020, Yousef Al Otaiba, the UAE ambassador to the United States, warned Israel that its relations with Arab nations would suffer if there is any “illegal seizure of Palestinian land.”

Still, the UAE-Israel relationship is not everlasting, he said. “This relationship is going to be dictated by the UAE… When it doesn’t serve the interest of the UAE… it can collapse at any time.”

Europe’s energy prices slump. Just not on your bill.