Israeli startups are already on track for a record-breaking year of funding and acquisitions.

The new government Startup Visa initiative for foreign entrepreneurs and tech workers could make the local startup ecosystem even more prolific and profitable.

The Israeli Ministry of Economy and Ministry of Interior, along with the Office of the Chief Scientist, will soon start allowing entrepreneurs from around the world to come to Tel Aviv for 24 months in order to develop innovative projects.

Entrepreneurs who wish to stay in Israel and open a startup company can be granted a special Expert Visa extendable for up to five years. They may then receive reimbursement for their work, and their companies may apply for support from the Office of the Chief Scientist.

“Israel is perceived in the world as a center of innovation and development, and we must preserve this achievement. The Startup Visa will enable foreign entrepreneurs from around the world to develop new ideas in Israel that will aid the development of the Israeli market,” said Minister of Economy Aryeh Deri.

The upcoming program is meant to ease some of the bureaucratic red tape currently facing collaborations between Israeli and foreign startups.

At the moment, Israeli work visas are granted for one year at a time and companies that want to bring foreign talent to Israel must prove that no local hire can do the job.

According to a Compass report ranking, Tel Aviv is the No. 1 startup ecosystem outside of the United States, but the city’s greatest challenge is the integration of international talent – currently 40 percent lower than in Silicon Valley. The Tel Aviv-Yafo municipality’s goal is to diversify the workforce in order to promote the ecosystem.

“Young entrepreneurs from all over Israel come to Tel Aviv to invent new products, and now young people from all over the world will be able to come and share this phenomenon with us,” said Mayor Ron Huldai.

“The decision of the Israeli government to launch a Startup Visa in 2016 is groundbreaking for the state of Israel and makes Tel Aviv’s ecosystem even more accessible and attractive for foreign entrepreneurs.”

Collaboration takes a step up

International collaborations between Israeli startups and foreign companies are important because the Israeli market is small and also because foreign entrepreneurs can potentially bring knowledge and experience in fields lacking in Israel.

“We are creating another means of increasing productivity and competition in the market. Foreign entrepreneurs who will arrive in Israel will bring new ideas and different methods of working and thinking which will grow Israel’s atmosphere of entrepreneurship and innovation, which is among the leading in the world. I believe that any initiative that will succeed in this framework will create new jobs and help increase production and growth in the market,” said Israeli Ministry of Economy Director General Amit Lang. 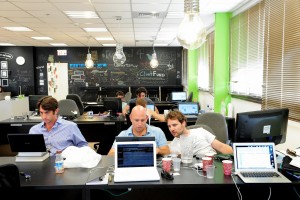 Bringing foreign innovators into the Tel Aviv startup ecosystem is hoped to spur even greater success. Photo courtesy of the Tel Aviv municipality

Tel Aviv, a.k.a. the Startup City, has already signed city-to-city collaborations that allow entrepreneurs to visit each other’s ecosystems and receive a “soft landing” package including desks at co-working spaces, advice on visas, regulations and legal issues around starting up companies, as well as one-on-one mentoring and access to the ecosystem.

The Startup Visa program is anticipated to provide an even better source of innovation for future partnerships.

“This is a really exciting time for entrepreneurs from around the world. Tel Aviv is the Startup City of the Startup Nation, and we see a huge amount of foreign companies looking to be part of the amazingly innovative culture we have here,” said Hila Oren, CEO and founder of Tel Aviv Global.

The Office of the Chief Scientist at the Israeli Ministry of Economy will soon publish a call for proposals in different technological fields. Those granted Startup Visas will get a workspace, physical and technological infrastructure, professional support and exposure to Israel’s atmosphere of innovation.

“The state of Israel is known the world over as a source of technological innovation and as country with a uniquely supportive environment,” said Chief Scientist Avi Hasson.

Announcement after the meeting of the Greek MFA, N. Kotzias, with his German counterpart, Frank-Walter Steinmeier