The gender pay gap is a clear expression of existing inequalities and of the obstacles women face when entering and staying in the labour market, as mentioned European Commission. 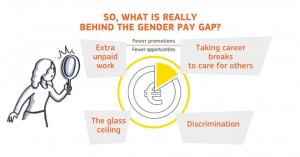 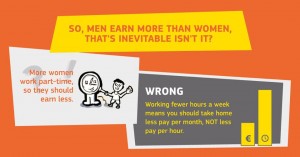 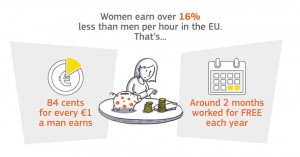 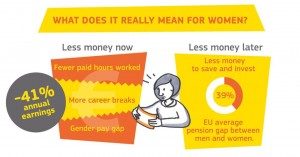 What is the gender pay gap and how is it measured in the EU?

The gender pay gap is a clear expression of existing inequalities and of the obstacles women face when entering and staying in the labour market.

Gross earnings are wages or salaries paid directly to an employee prior to deductions for income tax and social security contributions. In the EU, data on the gender pay gap is based on the methodology of the Structure of Earnings Survey.

The data are collected on a yearly basis and include all employees from companies with 10 or more employees regardless age and hours worked.

What are the causes of the gender pay gap?

The effect of the gender pay gap goes beyond working life, as it affects a person’s lifetime, and leads to women having less money to save and to invest. The ‘gender pension gap’ shows that on average across the EU, women’s pensions are 39% lower than men’s.

What do Europeans think about the gender pay gap?

Just over half of respondents to a Eurobarometer published earlier this year (53%) think that women being paid less than men for the same work should be dealt with urgently.

According to the results of a public consultation published today, nearly one in three respondentsthink that the most urgent inequality to be dealt with by the European Commission is the fact thatwomen are being paid less than men for the same work. Other inequalities that contribute to the gender pay gap were also rated as a high priority, including the small number of women in positions of power (17.1%) and the unequal sharing of caring and household tasks (11.4%).

The gender pension gap on the other hand was only mentioned by 3.1% of individuals as an urgent inequality.

Has there been any progress in reducing the gender pay gap recently?

The gender pay gap has slightly decreased from 17.7% in 2006 to 16.3% in 2013. This trend could be misunderstood as an improvement of the situation. The minute decrease for the past years is largely a result of the economic crisis, which has seen men’s earnings decrease, rather than women’s earnings increase. For example, the manufacturing sector, traditionally characterised by a high gender pay gap, lost ground at the beginning of the economic crisis. If progress carries on at such pace, we will need 70 more years to achieve equal pay.

How can closing the gender pay gap help the economy?

Closing the gap can benefit companies. Employers who promote gender equality contribute to better working conditions for everyone. Paying women and men for their actual skills and valuing their contribution on an equal basis helps recruiting and retaining the best and most talented staff.

There are also benefits for the economy as a whole. The under-utilisation of women’s skills is a lost resource for the economy and for society at large. A salary not matching the employee’s education and experience deters women from entering or staying in the labour market, making the labour market less efficient than it would be under optimal conditions. With an ageing population and falling birth rates, this is an even more pressing problem.

Finally, closing the gender pay gap contributes to creating a more equal society and helps to achieve financial and economic independence for all.

What is the Commission doing to close the gap?

The Commission keeps monitoring the correct implementation and enforcement of existing EU legislation on equal pay. It also supports Member States and other stakeholders in terms of the implementation of the existing rules.

The Commission’s 2013 Report reviewing the application of the Gender Equality Recast Directive on equal treatment between men and women in employment and occupation (2006/54/EC)in Member States, focussing on equal pay, aims to assist all relevant stakeholders in implemeting existing laws. The Report comes along with several practical guidance, including the guidance on gender-neutral job classification systems, to help Member States and employers bridge the gender pay gap.

Last year the Commission adopted a Recommendation on strengthening the principle of equal pay between men and women through transparency. This law aims to help Member States find the right approach to tackle pay discrimination and the persisting gender pay gap.

The Commission is also undertaking a number of policy and awareness-raising actions to address the gender pay gap.

In May this year, the Commission proposed country-specific recommendations under the European Semester (see IP/15/4975) to8 Member States on gender equality, work life balance and/or labour market participation of women –one of these includes specifically the recommendation to take action to narrow the gender pay gap. The Commission also initiated the European Equal Pay Day to raise awareness of inequalities in pay; it helps the exchange of best practices among Member States and finances Member State initiatives through the Structural Funds and actions by civil society.

What does the Commission Recommendation on pay transparency propose?

The Recommendation focuses on pay transparency, which is essential for effectively applying the equal pay principle. It provides a tool box of concrete measures to assist Member States in taking a tailor-made approach to improving wage transparency, including:

–           allowing employees to request information on pay levels, broken down by gender, for categories of employees doing the same work or work of equal value;

–           regular reporting by employers on wage structures by category of employee or position, broken down by gender (limited to large and medium companies);

The Recommendation invites Member States to choose and implement at least one of the above measures in regard to their domestic circumstances.

Other measures provided in the Recommendation that would also contribute to increased wage transparency are: 1) improved statistics on the gender pay gap; 2) a clear definition of “work of equal value” and the promotion of gender-neutral job evaluation and classification systems; 3) strengthening the role of gender equality bodies in tackling gender pay discrimination; 4) the consistent monitoring and enforcement of effective application of equal pay principle by Member States; 4) awareness-raising activities on the issues related with the equal pay and the gender pay gap.

REPRESENTATION OF THE EUROPEAN COMMISSION IN GREECE
EU gender-pay-gap