The annual bathing water report published today proves the value of the legislation and the years of investment in waste water infrastructure and other pollution reduction measures. It shows that bathing water quality has improved continuously over time leading to 96 % of monitored bathing sites in the EU meeting the minimum standards for water quality in 2015.

The report compiles analyses of water sampled at more than 21 000 coastal and inland bathing sites across the EU, Switzerland and Albania indicating whether or not it has been contaminated by faecal pollution from sewage or livestock.

While 96 % of bathing sites met the minimum requirements, more than 84 % met the more stringent ‘excellent’ level. Several large tourist areas and cities like Blackpool, Copenhagen and Munich are also starting to benefit from investments in improved sewage systems, which are leading to cleaner bathing sites at harbour areas, urban river locations and nearby beaches.

Karmenu Vella, European Commissioner for the Environment, Maritime Affairs and Fisheries, said:“European bathing water is at 96 % acceptable and 84 % excellent standards. That is the result of 40 years investing in water and waste water infrastructure. It is a sign of EU legislation working well. And it is a perfect testimony to the fact that a highly evolved economic area such as ours can produce equally high environmental standards.”

Hans Bruyninckx, EEA Executive Director, said: “Our assessment shows that bathing water quality has improved remarkably over the years. More and more bathing waters have not only reached the minimum requirements, but have improved to excellent standards. In some cities, people can even enjoy swimming in public harbour baths.” 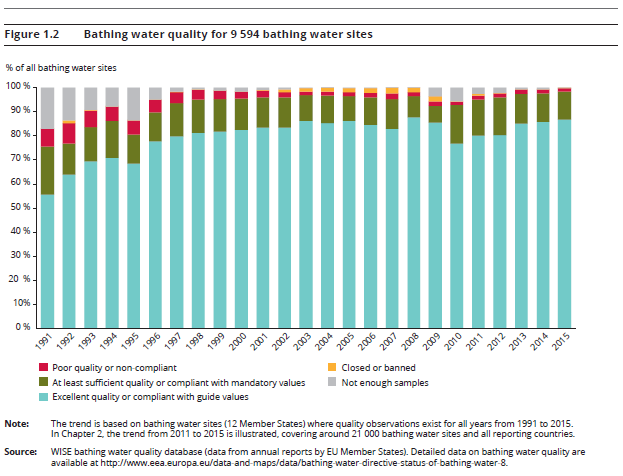 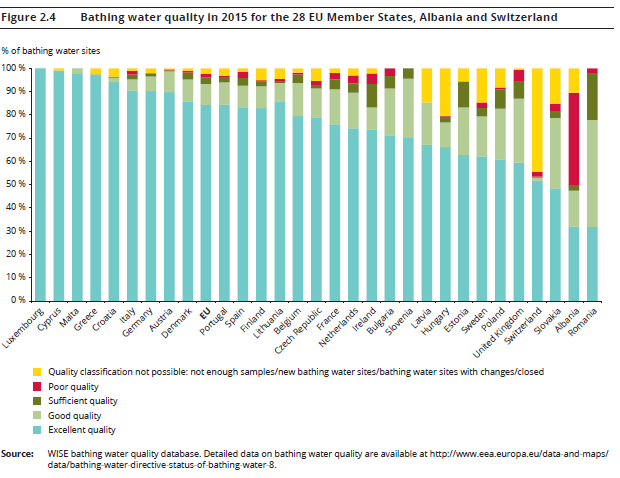 For recreational activities such as swimming, faecal contamination is a cause of concern for public health. Swimming at contaminated beaches or bathing lakes can result in illness. The major sources of pollution are sewage and water draining from farms and farmland. Such pollution increases during heavy rains and floods due to sewage overflow and polluted drainage water being washed into rivers and seas. Forty years ago, large quantities of uncontrolled, untreated or partially treated wastewater were discharged into many of Europe’s waters.

The 2015 bathing season was the first time that all EU Member States monitored their bathing sites according to the provisions of the EU’s revised Bathing Water Directive (2006/7/EC). The directive specifies if the bathing water quality can be classified as ‘excellent’, ‘good’, ‘sufficient’ or ‘poor’ depending on the levels of faecal bacteria detected.

The outcome of the report will also be in focus during #EUGreenWeek, 30 May – 3 June 2016, as part of the event’s broader theme this year, ‘Investing for a greener future’. 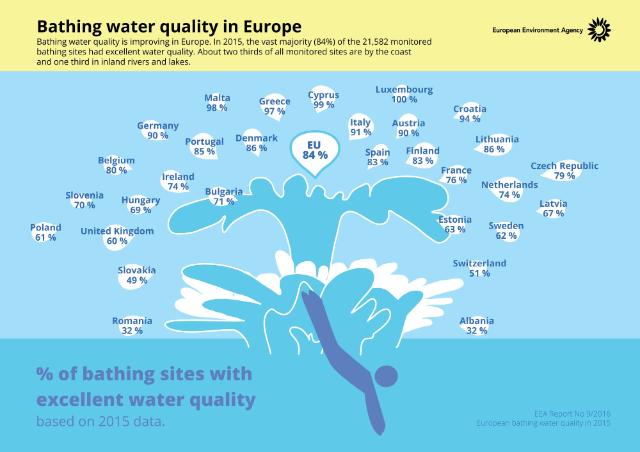