On the seabed off the coast of Lanzarote, British artist Jason deCaires Taylor is creating an extraordinary series of underwater artworks, concrete figures representing desperate refugees and selfie-taking tourists that are transformed as they become slowly colonised by marine life!

Jason deCaires Taylor is sinking fast. Below, 15 metres under the surface of the sea, a crowd of figures, unmistakably human, are motionless. It is eerily still but for the schools of fish weaving through this newly arrived sunken society. Taylor has just submerged these sculptures in what will become Europe’s first underwater museum, Museo Atlantico, in Lanzarote. Under the surface of the water, The Raft of Lampedusa, a sculpted boat carrying 13 refugees, is still just visible as it is lowered. Divers surround it, inflatable buoys hold it while Taylor waits with a waterproof clipboard, ready to place it in its new home, as mentioned in Guardian.

Taylor’s Raft of Lampedusa – a modern take on Géricault’s 1818 painting The Raft of the Medusa – will soon be joined on the seabed by other statues; a faceless couple taking a selfie, people glued to their phones, others wielding an iPad or pointing cameras. Everyone – the boat and its passengers, the “Instagram generation” – will be heading towards a wall, the entrance to a city and the point of no return. Beyond, a human botanical garden – fantastical hybrids of people and plants drawn from the flora and fauna of Lanzarote. With plans for an underwater fountain, lighting and a giant mirror reflecting a “pool” in the sea, Taylor is clearly aiming for something epic with this thought-provoking journey.

This is the latest in a succession of his underwater installations. The first was in 2006, when he placed Vicissitudes, a ring of beautifully sculpted schoolchildren, on the edge of an ocean shelf, in Molinière Bay, Grenada. That work was instrumental in creating a protected marine park and is now listed as one of National Geographic’s 25 wonders of the world. Just over a year ago, in the Bahamas, he sank the world’s largest underwater sculpture, the 40-tonne, 16ft Ocean Atlas, positioned near the surface, shouldering the weight of the water. Last summer, with The Rising Tide, he conjured four “horsemen of the apocalypse” in the Thames near the Houses of Parliament, the beasts’ heads – cast from oil wells – revealed in full only at low water.

Taylor is a British artist, a sculptor and photographer; a diver and a naturalist. It is fair to say he’s something of a pioneer. His largest-scale work to date – and, until now, the only underwater museum in the world – is Museo Subacuático de Arte(Musa). Here, 26ft under the Caribbean in Cancun, Mexico, the work The Silent Evolution, made of nearly 500 statues, was cast from local people in the nearby fishing village of Puerto Morelos. Among the figures, a pregnant woman holds her swollen belly, a child clutches a small bag; the fisherman Joachin raises his head skywards. Last year, I visited the site with Taylor – after his two-year absence, these casts have come to life. We swim to one statue. A blood-red sponge has spread like scar tissue across her features, softening her expression, outlining her nose, lips and eyes. She is vibrant with colour, her cheeks pulsing with life. Algae trace her hairline, purple acropora coral protrudes from below her chin. Taylor points to lobsters peering out from beneath and nods. All good signs of a healthy, thriving reef. 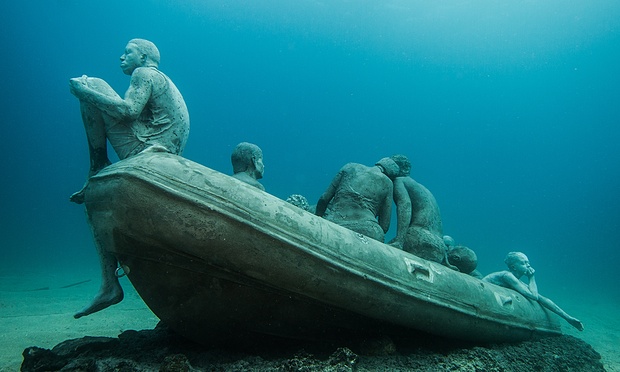 The Raft of Lampedusa seen from the front of the boat. Photograph: Jason deCaires Taylor

The Raft of Lampedusa carries 13 passengers towards an unknown future. On the bow of the flimsy inflatable boat sits an African man, his eyes closed, his hand resting on a cheap lifejacket. Abdel Kader, who Taylor cast as the figurehead of this boat, comes from Laayoune, the largest city in Western Sahara. The region’s proximity – 115km from its coastline to the Canary Islands – makes it a profitable departure point for migrant smugglers. Kader is 29 now – he made the dangerous journey to Lanzarote 16 years ago. By the age of 12, he had lost his sister and father; with 10 brothers and his mother to support, he worked, saved and found his way to the traffickers. Kader remembers being taken across the Sahara in a Land Rover at night to where the small fishing boats – patera – were still being built. To a 12-year-old boy, the vessel looked safe. At sea, the engine stopped and water began to come in. He remembers the 24 passengers, desperately bailing with whatever they could. He couldn’t swim. “I was worried for my family, who I had to support,” he says. By the fourth day, they were so tired, the pails were lost and the boat was flooded. A fishing boat found them and radioed for the patrol that rescued them. Kader called his mother from Lanzarote. “She cried down the phone. She didn’t know I had left.”

The Raft of Lampedusa is not meant as a tribute or a memorial, but serves as a reminder of our passivity, and our collective responsibility. “Wherever you put it, this is a powerful sculpture,” says Jones, “a disturbing image of the world we’re creating.” So what, he wonders, happens when you sink it in the sea? In this place, so often a realm of death, it will be transformed by new life in all its bizarre multiplicity – Taylor expects octopus to colonise it. 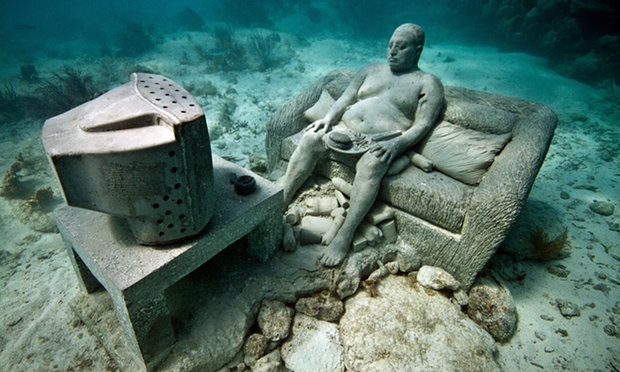 Inertia, an exhibit at Musa, off the coast of Mexico. Photograph: Jason deCaires Taylor 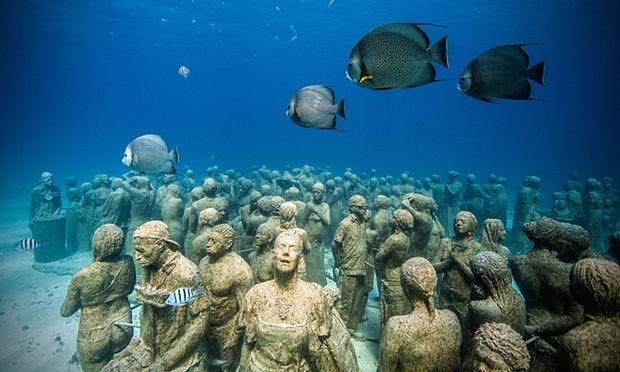 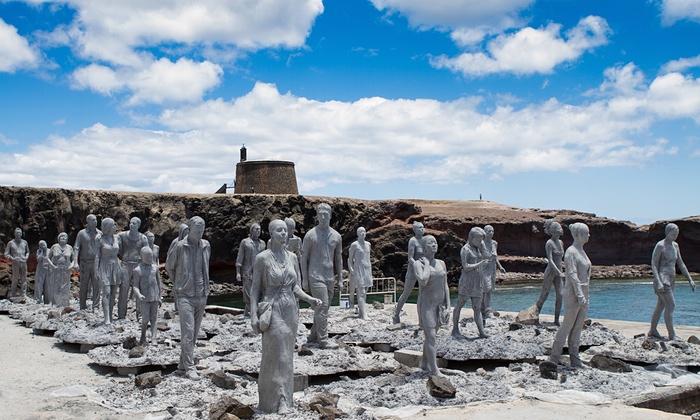 Sculptures that form part of the Rubicon installation are seen on land in Lanzarote. The final piece features a fence that the figures walk towards. The piece is about the dangers of climate change and the fence marks a point of no return – the figures walk towards it looking at mobile phones and not paying attention. Photograph: Jason deCaires Taylor 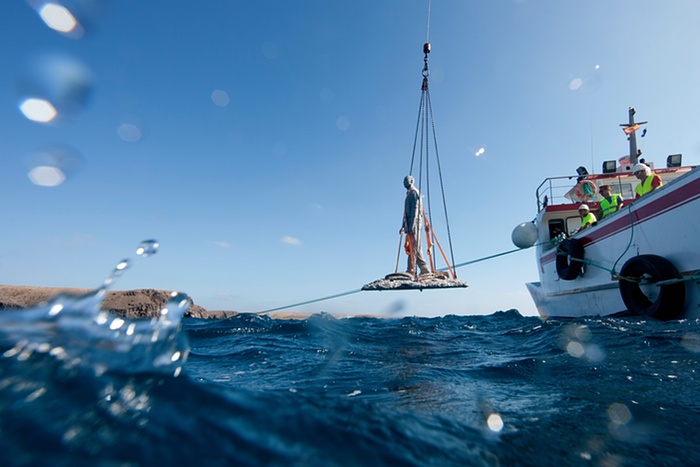 One of the sculptures being lowered into the Atlantic off the coast of Lanzarote Photograph: Cat Vinton 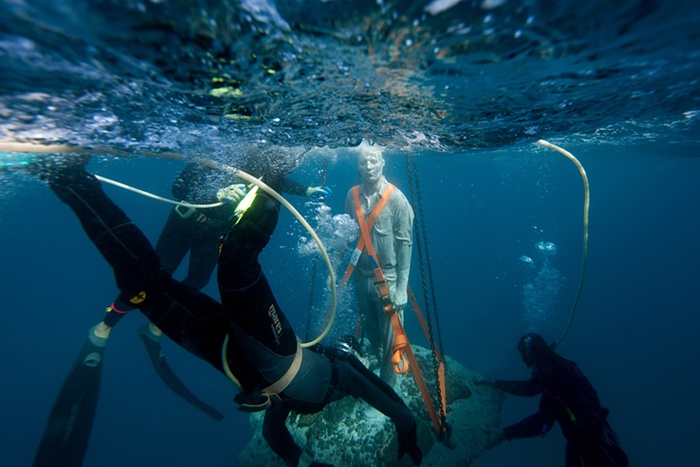 The Consul General of Romania, Mr. Martin Ladislau Salamon, at at the Ministry of Macedonia and Thrace