The European Commission today adopted a package of measures to make it more difficult to acquire firearms in the European Union, better track legally held firearms, strengthen cooperation between Member States, and ensure that deactivated firearms are rendered inoperable.

The proposals presented today were foreseen in the European Security Agenda adopted in April 2015, but have been significantly accelerated in light of recent events. The Commission is hereby supporting Member States in their efforts to protect Europe’s citizens and prevent criminals and terrorists from accessing weapons. 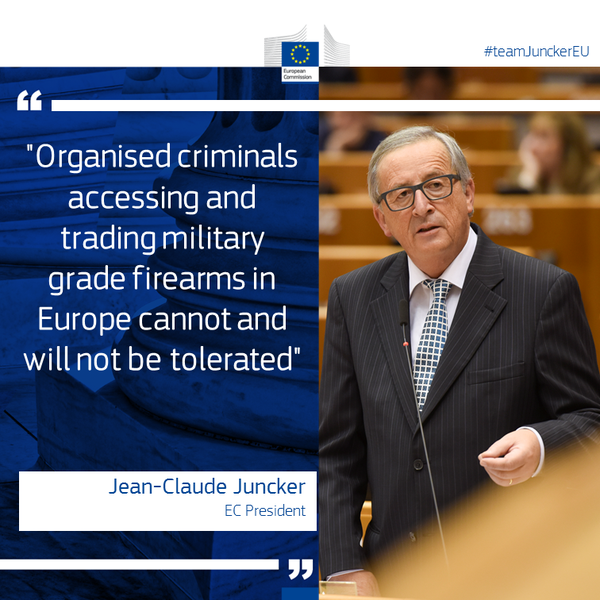 President Juncker said: “The recent terrorist attacks on Europe’s people and values were coordinated across borders, showing that we must work together to resist these threats. Today’s proposal, prepared jointly by Commissioners Elżbieta Bieńkowska and Dimitris Avramopoulos,will help us tackle the threat of weapons falling into the hands of terrorists. We are proposing stricter controls on sale and registration of firearms, and stronger rules to irrevocably deactivate weapons. We will also come forward with an Action Plan in the near future to tackle illicit arms trafficking. Organised criminals accessing and trading military grade firearms in Europe cannot and will not be tolerated.”

Internal Market and Industry Commissioner Elżbieta Bieńkowska and Migration, Home Affairs and Citizenship Commissioner Dimitris Avramopoulos added: “The adoption of the firearms package today is proof of the Commission’s determination to address the new reality we are confronted with. We need to remove regulatory divergences across the EU by imposing stricter, harmonised EU standards for firearms and ensuring efficient exchange of information between Member States.”

The package of measures on firearms adopted by the College of Commissioners today includes the following elements:

A revision of the Firearms Directive, to tighten controls on the acquisition and possession of firearms

The Commission has today tabled proposals to amend the EU Firearms Directive, which defines the rules under which private persons can acquire and possess weapons, as well as the transfer of firearms to another EU country. The main elements of the proposed revision are:

The proposed amendments which the Commission has tabled today now need to be approved by the European Parliament and Council.

An Implementing Regulation on common minimum standards for deactivation of firearms

The Implementing Regulation sets out common and strict criteria on the way Member States must deactivate weapons so that they are rendered inoperable. The possession of the most dangerous firearms – even if they are deactivated – will no longer be allowed.

The Implementing Regulation is based on the criteria for deactivation developed by the Permanent International Commission for the Proof of Small Arms (the CIP). Following a positive vote on the draft Regulation by Member States in a comitology committee earlier this morning, the College of Commissioners formally adopted the text. The Regulation will be published immediately in the Official Journal and will enter into force after 3 months.

Today’s package of measures to strengthen the control of firearms within the EU is based on a detailed evaluation of the implementation of the Firearms Directive carried out by the Commission last year in the context of its Regulatory Fitness programme (REFIT), which aims to ensure that existing EU regulation is fit for purpose. To ensure the best practical results on the deactivation of firearms, the Commission will regularly review and update the technical specifications laid down in this Regulation.

An action plan against the illegal trafficking of weapons and explosives

In addition to the adoption of these stricter rules and standards, the Commission also announced today that it is developing an action plan against the illegal trafficking of weapons and explosives. Issues to be tackled in this future action plan will include:

While arms trafficking is mainly a national competence, given the clear cross-border dimension there is a need for stronger police and intelligence service coordination and stronger import checks. The Commission will propose actions to support Member States’ activities, building on the Action Plan on illicit trafficking in firearms between the EU and the Western Balkans. The EU-Western Balkans summit of Ministers of Justice and Home Affairs on 7 December will be a further opportunity to take stock of progress on the Action Plan.

The responsibility for ensuring internal security is first and foremost with the Member States, but cross-border challenges defy the capacity of individual countries to act alone and require EU support to build trust and facilitate cooperation, exchange of information and joint action.

President Juncker‘s Political Guidelines identified the security agenda as a priority for this Commission, and the 2015 Commission Work Programme committed to the delivery of the European Agenda on Security.

On 28 April 2015, the European Commission set out a European Agenda on Security for the period 2015-2020 to support Member States’ cooperation in tackling security threats and step up our common efforts in the fight against terrorism, organised crime and cybercrime. The Agenda sets out the concrete tools and measures which will be used in this joint work to ensure security and tackle these three most pressing threats more effectively.

In the Agenda and in the Work Programme for 2016, the Commission promised to review the existing legislation on firearms in 2016 to improve the sharing of information, to reinforce traceability, to standardise marking, and to establish common standards for neutralising firearms. In light of recent events we have decided to significantly accelerate this work. Since then, significant progress has been made in implementing the elements of the agenda.

Today’s initiatives complement ongoing work to tackle the illegal trafficking of firearms, including notably the operational action plan between the EU and the Western Balkans and joint investigations and police cooperation which have been in place since 2013.

REPRESENTATION OF THE EUROPEAN COMMISSION IN GREECE
firearms

What Tsipras and Davutoglu said in the Press Conference