“The aim of the European Medical Corps is to create a much faster and more efficient EU response to health crises when they occur. We need to learn the lessons from the Ebola response; a key difficulty was mobilising medical teams. I thank all the Member States that have already contributed so far, and encourage others to join so the EU’s response will be able to meet increasing needs and will allow for better planning and preparation before any disaster.” said Commissioner Christos Stylianides who is hosting today’s high-level inauguration event in Brussels.

The framework for the European Medical Corps is part of the EU Civil Protection Mechanism’s new European Emergency Response Capacity (otherwise known as the ‘voluntary pool’). So far Belgium, Czech Republic, Finland, France, Luxembourg, Germany, Spain, Sweden and the Netherlands have already committed teams and equipment to the voluntary pool. 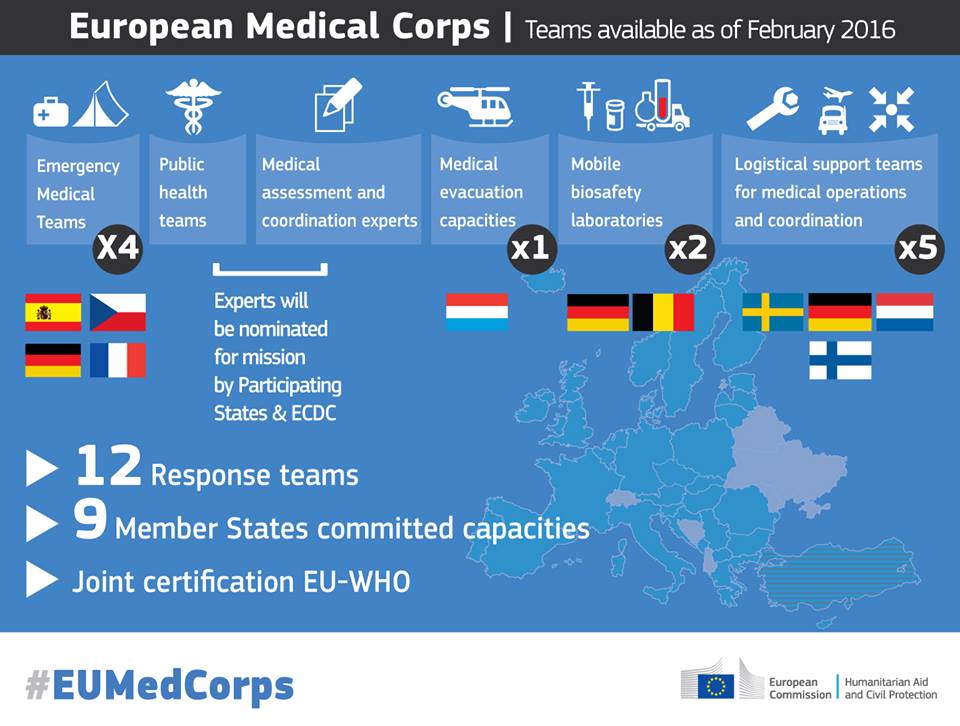 A key difficulty during the Ebola virus outbreak response was the quick deployment of medical staff, as well as the logistical and management challenges which increased as a result. This led Germany and France in late 2014 to propose the “White Helmets” initiative, which laid the foundations. The European Medical Corps is now part of the European Emergency Response Capacity.

The EU Civil Protection Mechanism facilitates cooperation in disaster response among 33 European states (28 EU Member States, the former Yugoslav Republic of Macedonia, Iceland, Montenegro, Norway and Serbia). Turkey is also in the process of joining the Mechanism. These participating states pool the resources that can be made available to disaster-stricken countries all over the world. When activated, the Mechanism coordinates the provision of assistance inside and outside the European Union. The European Commission manages the Mechanism through the Emergency Response Coordination Centre.

In an effort to step up the EU’s preparedness and response to disasters, the European Emergency Response Capacity (‘voluntary pool’) was created in 2014, bringing together a range of pre-committed relief teams and equipment, for deployment in emergency response operations all over the world.

The European Medical Corps will also be Europe’s contribution to the Global Health Emergency Workforce being set up under the helm of the World Health Organisation.

Lecture at Carleton University on “The Wreck of Cesnolas’s Napried”