One hundred and fourteen paintings and installations made by children aged from 3 to 14 years is currently exhibited in the Museum of Greek Children’s Art in Athens. Norwegian Ambassador Gjelstad amongst many others participated in the opening of the exhibition. The exhibition is part of a project funded by the EEA Grants. It aims to raise awareness and to develop critical thinking on the issue of racism to museum visitors of all ages.

Children are not racist; they have a sense of justice. They protest loudly when they or someone else are treated badly. This sense of justice expressed through art is an investment to a future generation were racism could be battled from a young age. Children are good at visualizing their feelings and perceptions through creative expressions on how they view the world while they discover it. The project, funded by the EEA Grants, aims to contribute to the development of future active citizens, able to defend the right of diversity and contributing to the elimination of racism and violence. The objective is to give information, awareness, reflection and a development of critical thinking, instead of intolerance, and to help children to assert their own identity and accept diversity.

The exhibition is a part of project called “Diversity and Racism” funded by Iceland, Liechtenstein and Norway through the EEA Grants as a part of “We are all citizens” managed by the Bodossaki Foundation. By the end of this school year, 3500 children in kindergarten and primary school will have participated in programs carried out by the Museum of Children’s Art. Schools that are unable to visit the Museum can borrow a mobile training program called “Diversity through art.”

The Embassy of Norway always supports  events to combat xenophobia and racism in Greece. It is worth recalling the active participation of the Norwegian Embassy through Grants EEA Grants to Xenophobil promotion.

The Institute “Young Leaders – Exelixis” and the Norwegian Embassy in Greece organized an event against xenophobia and racism entitled “Now the difference is sweeter …” on 6 June 2015 in Monastiraki Square in Athens.

The main objective of the campaign is to defend the right to diversity and the value of peaceful coexistence. This effort is sealed by the promotion of Xenophobil, a “drug” that relieves the symptoms of xenophobia and treats patients with a satirical recipe which makes everybody smile while reading the leaflet and tasting the sweet chewing gum.

In the first public campaign more than 25 volunteers from the Institute and the Norwegian embassy have participated and distributed 2500 packages!

The event was honored by the presence and with the active participation of the Ambassador of Norway, Mr. Sjur Larsen, since the Embassy of Norway in Greece standing main contributor to the Institute’s campaign against xenophobia and racism. 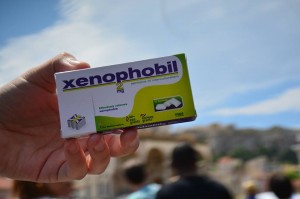 Embassy of Canada participated in the ILGA-Europe annual conference