After the decision of the Kingdom of Morocco to recall its ambassador and the cancellation of its participation in the Japan-Africa summit “TICAD 8”, due the reception by the Tunisian president of the leader of the Sahrawi separatists of the Polisario Front, Brahim Ghali, Tunisia announced the recall of its ambassador to Morocco too. Tunis assured that it had “maintained its total neutrality on the question of Western Sahara with respect for international legitimacy”.

In response, the Moroccan Ministry of Foreign Affairs specified, that: the Tunisian statement to try to justify a posteriori the hostile and deeply unfriendly act of the Tunisian authorities towards the first National Cause and the higher interests of the Kingdom of Morocco, contains many inaccuracies and untruths. Far from removing the ambiguities surrounding the Tunisian position, it has only deepened them.

TICAD is not a meeting of the African Union, but a framework for partnership between Japan and African countries with which it has diplomatic relations. TICAD is, thus, part of African partnerships, as it exists with China, India, Russia, Turkey or the United States, and are open only to African states recognized by the partner. Consequently, the rules of the African Union and its framework, which Morocco fully respects, do not apply in this case.

Regarding the invitation of the separatist entity to TICAD-8, it was agreed from the outset and with the agreement of Tunisia, that only those countries that have received an invitation co-signed by the Japanese Prime Minister and the Tunisian President will be able to take part in this meeting.

An official note verbale issued by Japan, August 19, 2022, explicitly emphasizes that this co-signed invitation is “the only and genuine invitation without which no delegation will be allowed to participate in the TICAD-8,” stating that “this invitation is not intended for the entity mentioned in the note verbale of August 10, 2022,” i.e. the separatist entity. 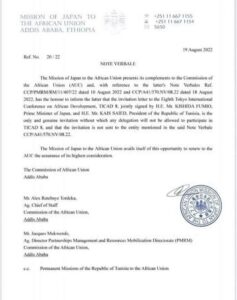 An official Japanese memorandum issued on August 19, 2022 revealed the lies of the Tunisian Ministry of Foreign Affairs regarding the directive of the Chairperson of the African Commission, a direct individual invitation to the Polisario Front.

The memorandum confirms that the Polisario Front was not invited, as Kais Saied claims, but it was agreed that participation would be limited to countries that received an invitation signed by both Japanese Prime Minister Kishid Fumio and Tunisian President Kais Saied only, and no delegation will be allowed to participate in the conference without the availability On an invitation bearing both signatures.

It is within this framework that 50 invitations were sent to African countries that have diplomatic relations with Japan and that Tunisia had no right to establish a process of unilateral invitation, parallel and specific to the separatist entity, against the explicit wishes of the Japanese partner.

The statement of Tunisia shows the same inaccuracy on the African position. This position has always been based on an inclusive participation of African states, not members of the AU. It is based on AU Summit Decision 762, which states that the TICAD framework is not open to all AU members, and that the format is defined by the same decision and by the arrangements with the partner. Even the Lusaka Executive Council resolution of July 2022, merely “encouraged inclusiveness” while conditioning it on “compliance with relevant AU decisions”, in this case Decision 762.

Regarding the substance of the neutrality and the reference of the Communiqué to “compliance with UN resolutions” in relation to the Sahara issue, the surprising and unexplained abstention of Tunisia during the adoption of Security Council Resolution 2602, last October, casts a serious and legitimate doubt on its support for the political process and UN resolutions.

In relation, finally, to the reception reserved by the Tunisian head of state to the leader of the separatist militia, the stubborn reference of the Tunisian statement to “the reception of guests of Tunisia on an equal footing” raises the greatest surprise, knowing that neither the Tunisian government nor the Tunisian people recognize this puppet entity. It reflects an act of hostility as blatant as gratuitous, and has nothing to do with the “tradition of Tunisian hospitality” which, in any case, can, in no way, apply to the enemies of brothers and friends who have always stood by Tunisia in difficult times.

Otherwise, several African nations condemned the Tunisian president’s decision to invite Polisario leader to the conference and regret Morocco’s absence from the 8th edition of TICAD, as Senegal, Liberia, Comoros and Guinea Bissau.