The United Nations Climate Change Conference was held at Sharm El-Sheikh, Egypt. The COP27 invited leaders across nations and a total of 45,000 participants to address the urgent climate crisis. The impact of climate crisis deserves immediate attention as the brisk changes are likely to influence societies and economies in the near future. 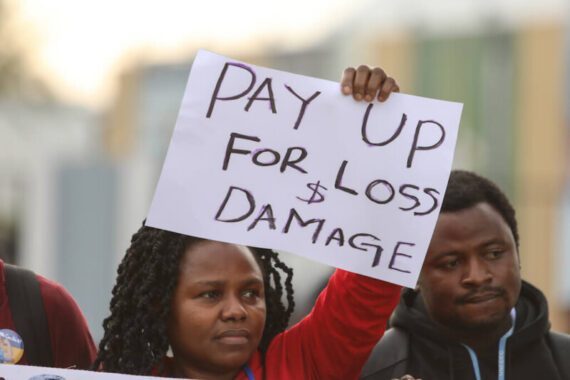 The loss and damage funding is a triumph for climate justice, and aims to support heavily affected developing countries gain resistance in battling the climate crisis. It has been adopted only after long advocacy.

A “transnational committee” amongst nations has been established to figure out how the operations for funding will take place and to prepare for the upcoming COP28.

At COP 27, new pledges were made for more than $230 million to the Adaptation Fund. Until a formal mechanism is established, solidarity finance will aid in cases of urgency. The governments of Scotland, Denmark, Wallonia, and some other philanthropist states donated a symbolic $19.5 million for the loss and damage fund to be used as solidarity finance.

Commitments rather than “placebo funds”

There is no doubt that this funding will help communities and individuals deeply stricken by the current climate crisis. However, from the Paris Agreement of 2015 to COP27 in 2022, there lies a gap in sustaining the commitments made towards funding. This has cast a shadow over the seriousness of the commitments and COP27 pledges.

The $100 billion per year by 2020 goal which was set by developed countries has not yet been met. This has raised concerns for the Loss and Damage Fund, which was first initiated at the Paris Agreement and, for which, the Warsaw International Mechanism was established and signed at COP21.

Unlike previous occasions and since the initiation of the Loss and Damage Fund discussion, the COP27 meeting aimed to make the fund the “central feature of all future climate negotiations.”

Specified targets still do not ease concerns as to the full pledge and commitment governments will have towards this new fund. This pledge is one that raises hope for the climate crisis battle and climate justice.

Yet, all this does not mitigate the suspense that this new fund could also become another “placebo fund.” The term was coined by Benito Müller, who stated that “the last thing anyone needs at this stage is to create (another) climate change ‘placebo fund’, i.e. a ‘pot’ created to buy-in developing countries into some overarching deal that remains empty.”

Commitments and meetings held at the COP27 have voiced urgent concerns that need to be addressed, namely concerning those left most impacted by the climate crisis in least developed and developing countries. The developed countries among the COP27 have taken steps in 2022 to address the Loss and Damage Fund. Climate justice seems to have gained importance among leaders that have been acknowledging the topic’s sensitivity.

The battle against the approaching human-made natural disaster will further pressure governments. The $100 billion per year agreed as a target for 2020 has lagged behind, making it now a minimum, while $1 trillion per year by 2030 is deemed necessary to “meet the scale of investment needs” as “unlocking substantial climate finance is key to solving today’s development challenges.”
Monetary importance of the climate crisis

Monetary concern has become an aggravating factor, especially in the urgency of the climate crisis. This creates more anxiety as the currently “increasing debt levels are making matters worse.”

All commitments and pledges made at the COP27 have presented a huge leap to fight climate injustice and the ongoing crisis. Yet, climate finance still holds uncertainty given structural changes and economic priorities.

The commitments made will be a deciding factor for the fate of those left in the communities most harmed by this urgency, and the efforts taken regionally will also be consistent with the pledges voiced on a global scale.

Overcoming climate injustices becomes synonymous with commitments that should be made regionally too. The fragility of the political world overburdens the efforts to tackle climate crisis; however, climate crisis demands urgent and unwavering attention.

The effects of climate change are experienced on an individual, societal, and global scale. Pledges and commitments voicing the importance of climate change for the future are not enough; climate change requires critical and sincere approaches that steer away from all types of “placebo funds.”