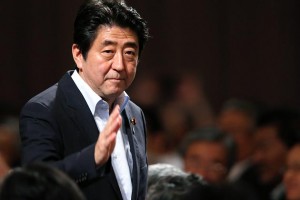 Japanese Prime Minister Shinzo Abe has declared “stage two” of his Abenomics program for
resuscitating the Japanese economy, with a goal of raising gross domestic product (GDP) by 20 percent to 600 trillion yen ($5 trillion) by 2020, among other targets, as mentioned at the Diplomat. But with the nation’s deflation demon yet to be slain and the economy slowing, the Abe administration’s mixed progress on reform has given critics plenty of ammunition.

On September 24, Abe marked his re-election as head of the ruling Liberal Democratic Party (LDP) by announcing three new policy “arrows,” headlined by the GDP target, which would see the world’s third-biggest economy reach 594 trillion yen in fiscal 2020 and 616 trillion yen the following year, assuming a real GDP growth rate of at least 2 percent. Other measures include keeping the population above 100 million people as well as enhancing social security for one of the world’s richest but fastest aging societies.

“For the next three years, I’d like to promote measures with an eye on the future. Today, Abenomics is entering its second phase,” Abe was quoted saying by the Japan Times.

“Low fertility and aging is a structural problem long neglected in Japanese society, and I intend to tackle it head-on,” he declared.

The center-right leader declared victory “is at hand” in Japan’s two decade-long war against deflation, despite recent data showing consumer prices reversed in August for the first decline in over two years.

He also set the target of raising the nation’s fertility rate to 1.8 from the current 1.4, helped by free preschool education, support for infertility treatments, and greater assistance for single-parent families. This would help ensure Japan’s population, currently around 127 million, stays above the 100 million mark for the next 50 years, Abe said.

Social security would also be boosted to help provide care for the estimated 150,000 people waiting to enter nursing homes, while Abe said he aimed to create more employment opportunities for retirees.

Yet despite the promised handouts, Abe said he remained committed to the planned hike in the consumption tax rate to 10 percent in April 2017, “barring a shock” like the 2008 Lehman Brothers collapse that heralded the start of the global financial crisis.

Abe described his new “arrows” as offering “hope,” “dreams,” and “peace of mind,” but critics were unconvinced.

“There’s virtually no inflation at all in Japan – after more than two years, Abenomics is starting to look like a failure,” Takuji Okubo, chief economist at Japan Macro Advisors, told Bloomberg News.

“Of the so-called three arrows, only monetary policy is working. There was a fiscal policy stimulus, but that was gone already in 2014 when the sales tax was raised. And about the third arrow, structural reform, there have really been no structural reforms at all. With his popularity starting to decline, I don’t think Prime Minister Abe can tackle any hard challenges in the rest of his tenure.”

Even the conservative Nikkei financial daily has questioned whether Abenomics can achieve its envisioned “virtuous circle” of rising corporate earnings, wage hikes, and consumer spending growth. After climbing 2.1 percent in fiscal 2013, real GDP contracted 0.9 percent the following year on the back of a consumption tax increase, with the economy predicted to post a 1.5 percent expansion in the fiscal year to March 2016.

The Nikkei also questioned where the money would come from for the promised childcare assistance, along with funds for the more than 6 million elderly Japanese needing nursing care or daily assistance. The welfare ministry has estimated a shortage of 380,000 caregivers by 2025, should present trends continue.

“Many market participants still hope for the third of Abenomics’ first three arrows: deregulation and other reforms to unleash growth. But such policies are curiously absent from the new additions to the quiver,” the newspaper said.

“Given the hand-in-glove relationship between the ruling LDP and special-interest lobbies in the upper house…some suspect Abe’s motives for relaunching his economic agenda.”

With Abe on track to become Japan’s longest-serving prime minister in more than four decades, the reformist leader still has time on his side after turning his attention from defense back to economics. Japan, and the rest of the world will be hoping Abenomics has not fired its last arrow.