Australia is looking at trialling passport-less travel in a move Foreign Affairs Minister Julie Bishop predicts will go global, as mentioned at the Exclusive Reportage by Latika Bourke for the Sydney Morning Herald.

The idea of cloud passports is the result of a hipster-style-hackathon held at the Department of Foreign Affairs, which culminated in an X-Factor style audition before the secretary Peter Varghese, Foreign Affairs Minister Julie Bishop, Assistant Minister Steve Ciobo and Chris Vein from the World Bank.

“We think it will go global.”

Earlier this year the call was put out to the diplomatic corps in Canberra and the 110 missions around the world for any idea that would provide a radical rethink of business as usual. 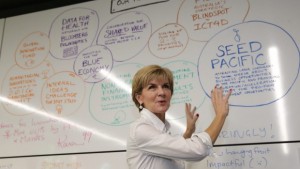 More than half the department’s staff responded by submitting, or by voting or commenting on one of the 392 pitches to the “DFAT Ideas challenge”.
The top 10 were presented to the quartet of judges, who favoured the idea of passport-less travel. Under a cloud passport, a traveller’s identity and biometrics data would be stored in a cloud, so passengers would no longer need to carry their passports and risk having them lost or stolen. DFAT says 38,718 passports were registered as lost or stolen in 2014-15, consistent with the 38,689 reported missing the previous year.

Australia and New Zealand are now in discussions about trialling cloud passports. Ms Bishop acknowledged there were security requirements that would have to be met in order to store biometrics in the cloud, but told Fairfax Media: “We think it will go global.”

The minister revealed the idea at the InnovationXchange headquarters in Canberra. InnovationXchange is a brainchild of the minister, dreamed up to disrupt the traditional ways bureaucrats distribute the aid budget, which the Coalition has severely cut since coming to office.

With its low slung chairs and beanbags for seats, standing desks and low hanging lightbulbs that wouldn’t look out of place in a converted warehouse in New York, Ms Bishop says the headquarters “would be at home in Silicon Valley”.

Staff dress casually and are encourage to shun suits. But the serious results they are already achieving in InnovationXchange’s short life are attracting attention from other departments, which have visited the team of nine staff to observe how they are challenging the cultural norms of bureaucracy.

Another initiative InnovationXchange is pioneering includes a US$100 million data collection service in partnership with Bloomberg Philanthropies.

His organisation will tip in $85 million with the Australian government contributing $15 million.

Data for Health will collect basic births and deaths data in 20 countries. The so-called health census data will be open source and available to governments, NGOs and the media.