The Ambassador of the State of Palestine to Greece, Mr Marwan Emile Toubassi, talks exclusively to thediplomat.gr and Chara Pagkalou, on the root of the Palestinian issue and the prospects of solving it, the Cyprus issue, the economy of Palestine, the refugee crisis as well as the bilateral relations between Palestine and Greece. 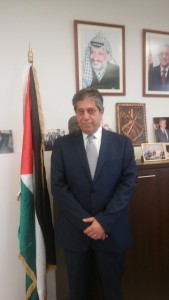 The Palestinian issue exists since the beginning of the 20th century, with the start of the mass emigration of Jews to Palestine –which was then under British occupation – perpetrated by Zionistic terrorist organisations under the cover and with the support of the then British forces.

The attacks of the Zionistic terrorist organisations continued cultivating a state of fear to the Palestinians. Genocide was committed against the Palestinians. More than 415 Palestinian villages were wiped off the map. 750,000 Palestinians escaped to neighbouring Arab states scared of the terrorist acts of the Israelis. The armies of the neighbouring Arab countries participated to the 1948 war which resulted to the largest part of the historical Palestine, 78%, being occupied by Israel, West Bank being annexed by Jordan and the Gaza strip ending under the control of the Egyptian command.

Our people revolted to defend its country against the Zionistic organisations, forming the first cells of resistance against the occupiers. The Palestinian Liberation Organisation (PLO) was founded in 1964 with the aim to liberate Palestine.

Since 1967, Israel occupied the remaining Palestinian territories and other Arab countries regions and since then we have a new period of terrorism perpetrated by, an organised by then, state of Israel, continued the confiscation of Palestinian land, where Israel goes on to behave as a country that is above the law, continuing its colonial policy. As a result, Jewish settlers in the occupied Palestinian lands reach 850,000 and the settlements 350, continuing the building of the racist wall which dissects the Palestinian lands into small administrative sectors. This in turn demolishes any hope for a two state solution. The imprisonment, execution and deportation of thousands of Palestinians continue. This very moment there are over 7,000 Palestinian political prisoners in Israeli prisons.

In 1993 there was a historic opportunity for the peaceful solution of the Palestinian issue with the Oslo agreement signed by both Yasser Arafat and Yitzhak Rabin foreseeing a transitional period of Palestinian self-govern for 5 years and negotiations for the remaining issues after the declaration of the Palestinian State. We accepted the two state solution because we believe in peace and because we need to put an end to the bloodshed. Rabin was then assassinated by Israeli extremists who did not accept a peaceful solution. We entered a new period of even more extreme Israeli politics with an increase of the settlements in our lands, an action that violates international law.

The only way for peace was the end of the occupation. Israel now claims that its security is under threat by the Palestinians. Let me remind you that Israel is the 8th most powerful country of the world and stocks nuclear weapons. Afraid of Palestine? Palestine is the party in need of protection.

Red lines to us are our steady values, the protection of our rights within the framework of international legality and of the Arab initiative for peace in the Middle East, aiming to establish an independent Palestinian State within the 1967 borders with East Jerusalem as capital and the resolution of the Palestinian refugees issue in accordance with United Nations Security Council Resolution 194, since we are not claiming foreign territories, these are lands that are our own. Moreover United Nations recognise the State of Palestine.

People all over the world that do not tolerate oppression, land occupation, are on the Palestinians side. An important step in our just cause is the recognition of the Palestinian State at parliamentary level by many countries, as done by Greece, indicating in that way that popular will was expressed.

With regard to the Cyprus issue we are supporting a resolution based on the international legality aiming at stability and unity for Cyprus and Cypriots with whom historically friendly relations unite us.

For as long there is occupation, Israel does not only control people but also goods. It cultivates natural recourses for the benefit of the Israelis via settlements. There are arable lands occupied by Israel. Before I arrived to Greece as Ambassador of the State of Palestine, I was Prefect in a region adjacent to the Dead Sea in the valley of river Jordan with a lot of fertile lands, rich in minerals and potassium as well as water reserves, all under Israeli exploitation.

Apart from the daily persecution of Palestinians that we face, Israel controls our water resources, reclaims them and then sells them back to us.

It is indicative that settlers consume 10 times more water than Palestinians.

Our tourism is also hit because of the occupation as Israelis guide tourists in our lands under occupation, even in East Jerusalem, claiming it belongs to them.

Israel controls the border guards. Even imports and exports need to pass through Israeli ports and airports.

There is no viable development for as long there is occupation. In spite of that, we are making a productive effort mainly in the sector of pharmaceuticals, textiles, tourism and agricultural products which we are trying to export. Notwithstanding, there are obstacles in our exports as Israel delays at the border the flow of Palestinian products such as fruit resulting in spoilt and not suitable for export produce. Moreover, this Israeli tactic raises the cost of the products as the export companies are forced to pay demurrage for every day their products stay in the ports rendering the Palestinian exports non-competitive.

The root of the problem in all Middle East is Israel’s political apartheid and the occupation, as well as the activities of Israeli terrorist groups with full support of the Israeli occupation force.

In terms of the refugee crisis, one country cannot suffer the consequences alone. Greece needs the support of EU to face this human tragedy.

Refugees did not leave at their own accord from their country, the left persecuted.

I am grateful to the Greek people for their help to the refugees. Greece however does not possess the necessary resources due to the financial crisis to cover the needs of all these refugees.

Greece is a country with very tight friendly ties with Palestine and our people are respectful. Greece has suffered the evils of occupation and refugeeism just as we did, and Greeks fully understand the savagery of the Israeli occupation.

In Greece there are permanently settled about 5,000 Palestinians. Most have taken Greece citizenship as they live here for many years. There are students, doctors, businessmen, engineers, pharmacists, that form part of the professional, social, even political Greek life.

There are Greeks in Palestine that lived there before 1948 just like in Alexandria, Egypt. Greek families live in Jerusalem and Ramallah and are fully assimilated as many Palestinians are Christian Orthodox, just like myself.

Greece is a country that could have a stronger role in the resolution of the Palestinian issue, as such a prospect would positively affect the country in itself.

Our diplomatic planning foresees our integration in all International Organisations as happened in UNESCO, the International Criminal Court and other organisations. Following the recognition by the UN of the Palestinian State as a non-member observer state, Greece supported this decision voting for it, a fact that confirms once again the standing position of all Greek Governments in the past and today, supporting the rights of our people and supporting the two sate solution. A Palestinian state, within the 1967 borders, with East Jerusalem as capital city, nest to the state of Israel. Our people shall continue their struggle following a peaceful resistance against the occupation until the materialisation of its inalienable rights to freedom and independence.

*The Ambassador of the State of Palestine to Greece, Mr Marwan Emile Toubassi was born in 1959 in Ramallah and has studied Political Science and International relations at Birzeit University

Rise of the robots: “There are some urgent questions we have to find answers to”