My mandate as Canada’s Ambassador to the Hellenic Republic comes to a close on October 16th. Despite the many challenges facing Greece, I remain hopeful about the future and inspired by the resilience, courage and “filotomo” of the Greek people.

I leave this wonderful country after four years during which I have been privileged to celebrate the 70th anniversary of Canada-Greece relations, the inauguration of a new Canadian Chancery and witnessed Canada becoming one of the largest foreign investors.

With the support of my Greek-Canadian spouse, Maria Pantazi-Peck, and my faithful embassy team, our shared goal has been to underscore a message of partnership and solidarity with Greece during these times. In this context Maria and I decided to forego a traditional diplomatic farewell reception, instead devoting attention in our final days to two causes we hold dear. We celebrate the new partnership between Sick Kids Hospital in Toronto and Aghia Sophia Children’s Hospital (www.paidon-agiasofia.gr) in Athens which will contribute to even better outcomes for children with cancer. Chronic care facility Asylon Aniaton (www.asylonaniaton.gr) and its dedicated team continue to care for some of the most vulnerable citizens of society.

Maria and I will make Canada’s national capital, Ottawa, our home base, at least for now. We intend to return often to Athens and as individuals to work in support of closer ties with our “defteri patrida”. 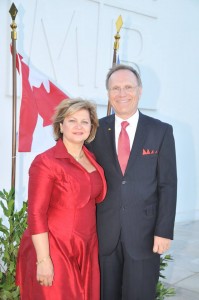 Is it time to do business with Iran?