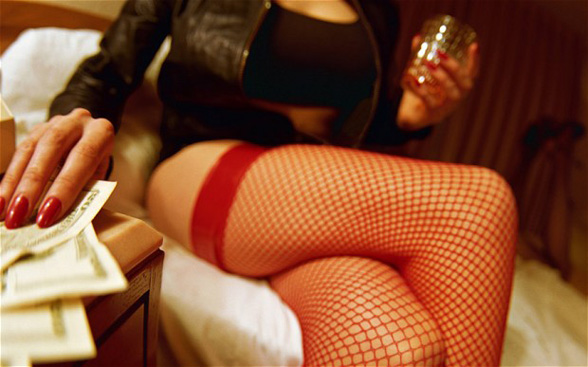 As about a dozen elderly men loiter in a small plaza near a cinema, mostly chatting or watching people pass by, several deeply wrinkled women stroll among them, trolling for customers willing to pay for sex in nearby motels.

“Hey, do you want to go with me? I can treat you really well,”

a 76-year-old woman with a limp says as a reporter approaches her on a recent sunny afternoon.

Despite a police crackdown this spring that resulted in 33 arrests, including an 84-year-old woman, the so-called “Bacchus ladies” can still be seen near the Piccadilly theater in Seoul’s Jongno neighborhood. The nickname comes from the popular energy drink that many of the prostitutes have traditionally sold.

Despite the country’s dramatic growth after the 1950-53 Korean War, many older women in South Korea’s male-dominated culture didn’t receive equal education and job opportunities in their youth. Widowed, divorced or abandoned by their children, some now find themselves without a social safety net and so are forced to take up prostitution. Some get paid to drink with older men and only occasionally have sex with them.

Elderly widowers and divorced men, meanwhile, seek out the women to fulfill sexual desires or fight loneliness amid lingering prejudice against second marriages and dating among senior citizens.

In late 2013 and early 2014, the number of “Bacchus ladies” peaked at about 300-400 in the Jongno neighborhood alone, according to Lee Hosun, a professor at Korea Soongsil Cyber University in Seoul who has interviewed dozens of the women. Now, after the police raid, there are roughly 200, many in their 60s and 70s, Lee said, with about 20 women regularly in the Piccadilly plaza area. Hundreds more “Bacchus ladies” are believed to operate across the country.

Prostitution is illegal in South Korea, and traditional red-light zones have been disappearing as urban redevelopment projects encroach on old neighborhoods. Despite occasional raids, however, the sex business still thrives in the shadows.

“I know that I shouldn’t do this,” said the elderly prostitute with the limp, “but no one can say that I should starve to death rather than come here.”

She agreed to talk with us at a nearby coffee shop after she failed to solicit any customers, but refused to give her name because her family doesn’t know she’s a prostitute.

She started out selling Bacchus drinks about 20 years ago. A couple years later she began selling sex. She still does it so she can pay for arthritis treatment, about $250 a month.

She and her husband live with their son, a low-paid manual worker, and his family, relying partly on government subsidies. “Every women here is keeping this a secret from their families,” said the woman, wearing a checkered blouse and navy blue pants.

One of the women says she needs the money to take care of her ailing mother. Another needs cash for her disabled children. One is illiterate. Some don’t talk with their adult children any more. Some are ethnic Koreans from China who came to Seoul trying to find a better life.

“It’s a tragedy,” says Lee, the professor. “It’s like our mothers are forced to lift up their skirts to make money because their children won’t feed them.”

According to Confucian ideals, parents are to be cherished by their children. For centuries, elder sons took their parents into their homes and cared for them until they died. But as the country modernized, younger generations moved to cities for jobs and school, leaving many parents behind in the countryside. Others simply stopped looking out for their parents.

South Korea has one of the world’s fastest aging populations, but pension and welfare systems for the elderly lag behind other developed countries. Nearly half of South Koreans aged 65 and older live on less than half the national median income, and the elderly suicide rate has nearly quadrupled over the past 25 years.

“My two children took all my money. I bought a house for my son when he got married and I also spent a lot when marrying off my daughter,” said a divorced 71-year-old “Bacchus lady” at the plaza. “Now, we don’t talk. I’ve been alone for a long time.”

The woman, who also declined to give her name out of shame, said she has been a prostitute for many years. “The first year, I felt really ashamed,” she said. “I couldn’t sleep well because I agonized over whether I should be doing this. Even now, I cannot sleep well.”

The woman, dressed in a dark two-piece suit and red shoes, said she hasn’t had a customer in 10 days, a similar refrain at the plaza as the economy cools. “Some women here are skipping meals. How can they buy food when they can’t even pay their rent?”

For the male customers, it is often a matter of staving off loneliness. Many elderly men were taught to sacrifice their personal lives for their companies and to keep their emotions hidden. After retirement, they often struggle to fill their days. 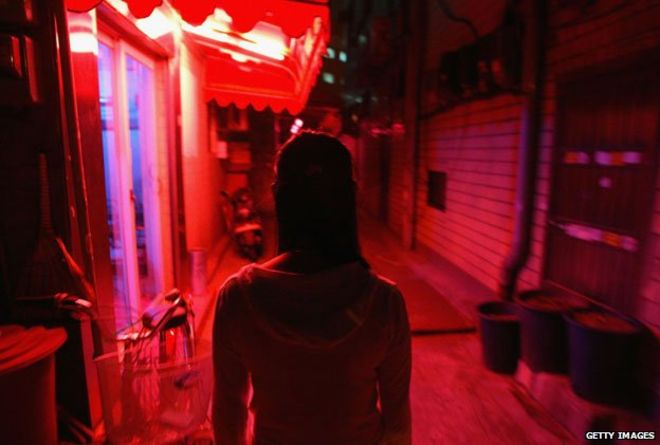 A 78-year-old divorced man said that he comes to the Piccadilly plaza every day to kill time. He said he sometimes goes to a quiet back alley with a “Bacchus lady” to chat and pays about $8 to touch her hands and breasts.

“I’ve been living alone for a long time so that kind of thing makes me feel refreshed,” said the man, who has virtually no contact with his two adult sons and their families. He identified himself only by his surname Jung. He used to buy sex from the women _ 30,000 won ($25) for the older ones and 50,000 won ($42) for the younger.

Before the police crackdown, a subway station near the plaza and a public park near Jongmyo Confucian shrine, a UNESCO World Heritage site, had been the main hotspots for “Bacchus ladies.”

After the occasional raids, authorities usually release the women they round up with a warning or a small fine because they know they’re too old to make a fresh start, according to police.

“I feel really sorry for them,” said a police officer in the area and would only identify himself by his family name, Jeong.

Lee, the professor, said that most of the women she has interviewed had dabbled in prostitution when they worked at karaoke bars and teahouses in their early years. Just a few, five or six, were ordinary housewives before turning into prostitution in their old age.

“No one told me they became prostitutes because they like it,” she said. “Is this really these elderly women’s dirty problem or is it a problem caused by the ordinary people who point their fingers at them? I think it’s our society’s problem.”