The world’s system for protecting refugees is broken. It is obvious – from Australia to South Sudan’s vast camps, from Istanbul’s cold streets to the European Union’s heavily fortified walls.

This has to change, now. Amnesty is putting forward eight solutions for how world leaders – in particular the richest countries – can start tackling this massive humanitarian crisis together.

Worldwide, 19.5 million people have been forced to seek sanctuary abroad. Governments have a duty to help them. But most rich countries are still treating refugees as somebody else’s problem. Hiding behind closed borders and fears of being “flooded”, they have conveniently allowed poorer, mainly Middle Eastern, African and South Asian countries, to host an incredible 86 per cent of all refugees.

And by ignoring most appeals for humanitarian aid, they have left UN agencies so broke they can’t even feed many refugees properly any more

Opening up safe routes to sanctuary for refugees is one important solution. That means allowing people to reunite with their relatives, and giving refugees visas so they don’t have to spend their life savings and risk drowning to reach safety.

It also means resettling all refugees who need it. Resettlement is a vital solution for the most vulnerable refugees – including torture survivors and people with serious medical problems.

Right now, 1.15 million people urgently need this lifeline. But so far, the world’s wealthiest nations are offering to resettle less than 10 per cent every year. Amnesty estimates that 1.45 million refugees will need resettlement by the end of 2017. 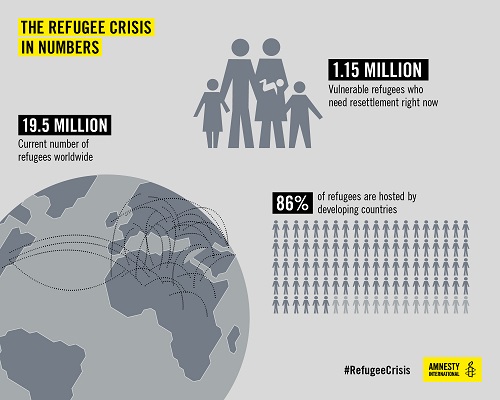 The refugee crisis in numbers – graphic by Amnesty International

World leaders also need to put saving lives first. No one should have to die crossing a border, and yet almost 7,000 people drowned in the Mediterranean alone in the two years since the first big shipwreck in October 2013.

In May 2015, thousands of people fleeing persecution in Myanmar suffered for weeks on boats while Thailand, Malaysia and Indonesia bickered over who should help them.

States can stop this by investing in search and rescue operations and immediately helping people in distress.

And whether they travel by land or by sea, people fleeing persecution or wars should be allowed to cross borders, with or without travel documents. Pushing people back and putting up massive fences only forces them to take more dangerous routes to safety. 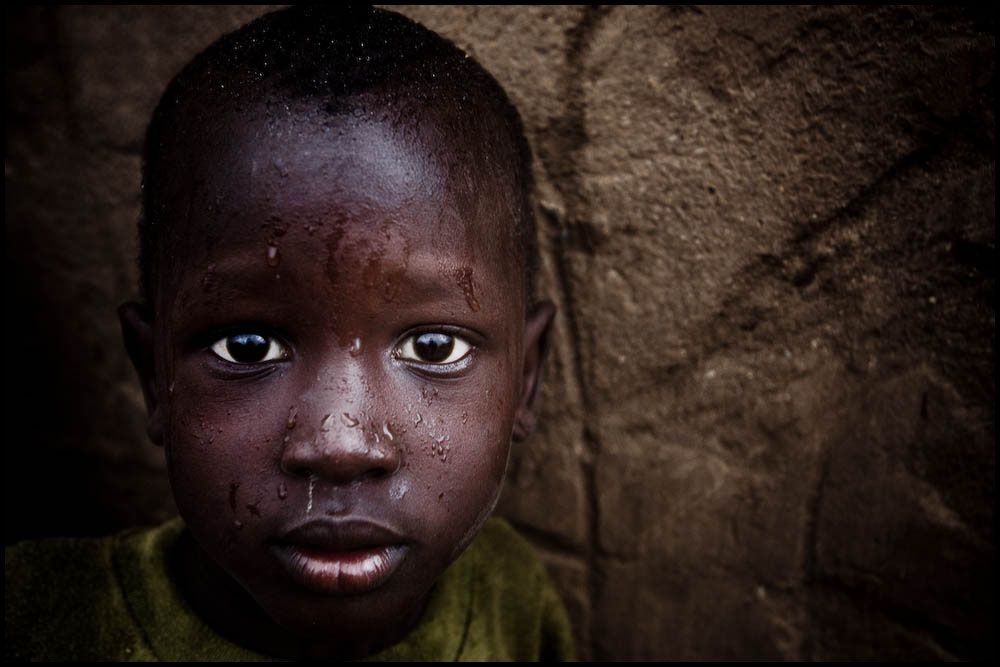 A young refugee after a flash rain storm in the Kakuma Refugee Camp in Kakuma, Kenya © Zoriah/www.zoriah.com, CC BY-NC 2.0

All countries should investigate and prosecute trafficking gangs who exploit refugees and migrants, and put people’s safety above all else. However, trafficking is just a symptom of the world’s broken refugee system – not the cause of it.

Governments also need to stop blaming refugees and migrants for economic and social problems, and instead combat all kinds of xenophobia and racial discrimination. Doing otherwise is deeply unfair, stirs up tensions and fear of foreigners, and sometimes leads to violence – even death.

In Durban, South Africa, at least four people died, many were seriously injured, and over 1,000 mainly Burundian and Congolese refugees forced to flee after violence and looting broke out in April and May 2015. 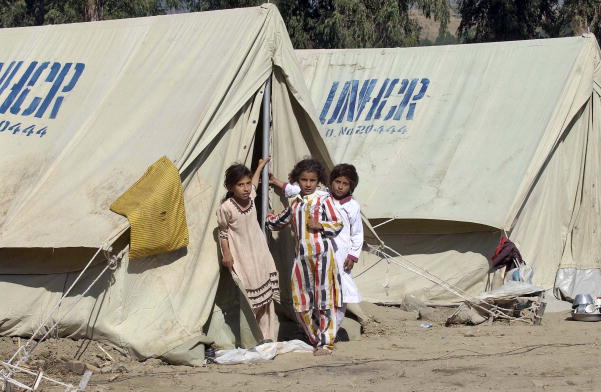 UN Refugee Agency Provides Shelter to Quake Victims – Girls pictured today in Bessian, Jammu and Kashmir, Pakistan at a tent city set up by the Office of the United Nations High Commissioner for Refugees (UNHCR) for some 300 families or 1,600 people. Up to 10,000 people are expected to arrive at this tent city soon due to the on-coming winter. photo United Nations, Flickr, CC BY-NC-ND 2.0

“Financially broke” is how Antonio Guterres, the UN High Commissioner for Refugees, described UN agencies in September 2015. Simply put, wealthy countries are not keeping their high-profile promises to fund aid for refugees abroad.

For example, the UN has received less than half the funding it needs to support Syria’s 4 million refugees. This is now forcing 80 per cent of refugees living outside camps in Jordan to do dangerous, degrading jobs or send their children out to beg.

South Sudan’s forgotten refugee crisis has been met with a pitiful 17 per cent of the money needed for absolute basics like food and medicine.

People are dying while governments spend billions on border control. When the wealthy Group of 20 meet in Turkey in November, all eyes will be on them to guarantee full funding for refugee crises worldwide. 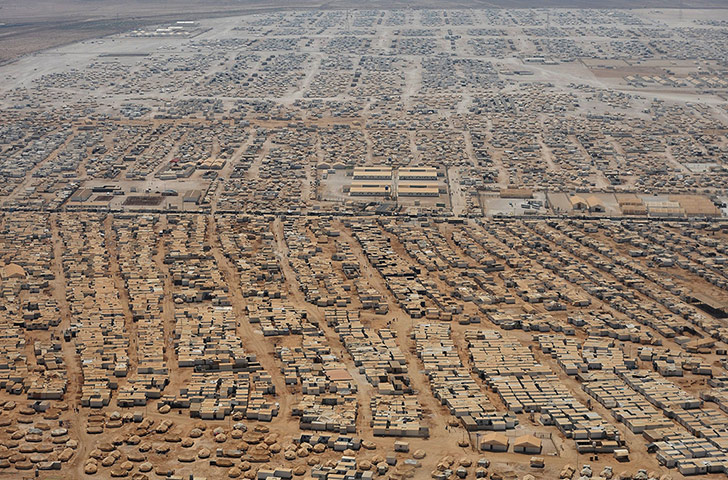 Zaatari_Camp_overview
Bidna Capoeira traveled September 2013 to Al Zaatari Refugee Camp in Jordan to give capoeira workshops to help desperately vulnerable refugee children trapped in a cycle of war and poverty. The sport, play and music of capoeira is incredibly effective in helping children develop the confidence, resilience, and mental strength they need to help them deal with the constant fear and instability of living as refugees. Bidna Capoeira aim to increase their presence in Jordan, Syria and Palestine over the next few months with more funding and awareness being key targets for the future. photo:bidnacapoeira, Flickr, CC BY-NC-SA 2.0

8. Asylum is a human right

The world has a very short memory. In the aftermath of World War II, most countries agreed to protect refugees through the 1951 Refugee Convention, and through UN agencies like the UNHCR.

Barbed wire fences and chronic underfunding have left that vision of a better world in tatters. By ignoring the warning signs, world leaders have allowed a huge, global humanitarian crisis to unfold. Ultimately, it will be resolved by ending the conflicts and persecution that forced people to flee in the first place.

But no one knows when that will be. Meanwhile, we need radical solutions, visionary leadership and global co-operation on a scale not seen for 70 years. That involves setting up strong refugee systems: allowing people to apply for asylum, treating their refugee claims fairly, resettling the most vulnerable of all, and providing basics like education and healthcare.

None of these eight solutions are impossible to achieve, if politicians listen to the millions of people saying “refugees welcome”, and put solidarity and compassion above petty wrangling over who should host a few thousand refugees.

Greek participation among the three winners of the photo competition 2015 “Europe in my region”!