Article by the Ambassador of the State of Palestine, Mr. Marwan Toubassi 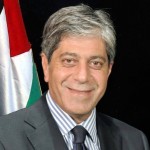 Ambassador of the State of Palestine, Mr. Marwan Toubassi

An unexplained event took place in the UN, Israel’s candidacy, after being nominated by certain countries to take over the presidency of the 6th committee (antiterrorism committee) where it won the majority of votes, an unprecedented fact. How to explain it, what are the motives behind the nomination of a country that commits organised state terrorism not only against the Palestinian people but also against other people in the region with this going back to the founding of the state on the ruins of another people, causing the Palestinian Exodus (Nakba) occurring when 750,000 Palestinian Arabs expelled from their cities and villages, their homeland in Palestine, were sent to exile, when more than 420 villages and communities were destroyed, when real genocide was committed, costing thousands of Palestinian lives in 1948.

Even if we assume that the founding of the State of Israel and the international recognition were the result of applying UN Resolution 181 foreseeing the existence of two states for the two people, the part of the Resolution pertaining to the State of Palestine was not implemented and this delinquent state committed more violations, occupied the rest of the Palestinian territories and more Arab territories in 1967.

The State of Israel keeps on exercising state terrorism, with the continuing occupation of land that, in accordance with UN resolutions and the recognition of Palestine as Non-Member Observer State in United Nations within the 4 June 1967 borders, should have formed the land of the Palestinian State.

This state that was voted as presiding in the sixth Committee, behaves as a state above International Law, was violating daily the International Legality by occupying foreign lands, by expansive settlement, the erection of a racist dividing wall, by murder, destruction, demographic change, the annexation of Jerusalem and the obsolescence of the principles of International Law.

This becomes even more so after taking into account the violations of the Geneva Convention, in particular of the Fourth Agreement relating to the protection of unarmed population during wartime, prisoners’ rights and their conditions of incarceration and the prohibition of settling occupied territories.

Voting the State of Israel into the presidency of the aforesaid committee, not only encourages it to continue but also to commit new atrocities and implement new methods of terror, but also appears as a reward for not conforming to the principles that the countries that voted for it are in theory defending, the principles of International Law and its protection.

They have kept rewarding this state instead of punishing it to comply and seize the occupation and the oppression of another people, the Palestinians, that dream of freedom and peace, in accordance with the right of any people to determine their future and foresee a future with peaceful coexistence of all the people in the region.

This dream will become reality as long as there is real commitment of the international community into achieving a just solution for my people, a solution that defends the legal and historical rights of the Palestinian people within the framework of the two-state solution, without terrorism, assassinations and destruction.

This commitment stands alongside with the positions of friendly European countries that are against the occupation and the settlements, with these countries historical and deep friendly relations connect us.