Mandy Patinkin is an actor and performer.

“I saw death behind me, and life in front of me,” said Safae, a Syrian mother of two young sons, as she told me the story of her family’s escape from the Islamic State. They had fled in the night across the Syrian-Turkish border and had arrived, finally, in Greece.
Looking at her two beautiful boys, I was reminded of my own grown sons. How similar our families were; face to face, it was so easy to imagine myself in her shoes, worn as they were after her dangerous trek.
After wrapping filming for the fifth season of “Homeland” in Berlin — living in a fictional world of chaos, violence and confusion — I went to the island ofLesbos to spend time with folks from the International Rescue Committee(IRC). I joined them there to support people like Safae and her family, who have faced the realities of terrorism and war that I have only imagined on screen.
Because of treacherous winds, no boats had come to shore in the two days since we had arrived, but there was one stranded family in the refugee center. Their money and papers had been lost in the waves when they landed, and they were trying to figure out how to reach relatives in Germany. They needed 150 euros — just enough for ferry and train tickets. I felt blessed to meet Safae, her husband, Koder, and their two sons and to be able to give them the money they needed to continue their journey.
Standing with them, I did not see strangers to be feared but the faces and stories of my own family. I saw Grandpa Max, who left Poland to escape the Nazis, and Grandma Masha, who was forced from Russia during the pogroms. And now I could help this family reach the safety of Germany — a place my ancestors had fled — in search of welcoming arms. 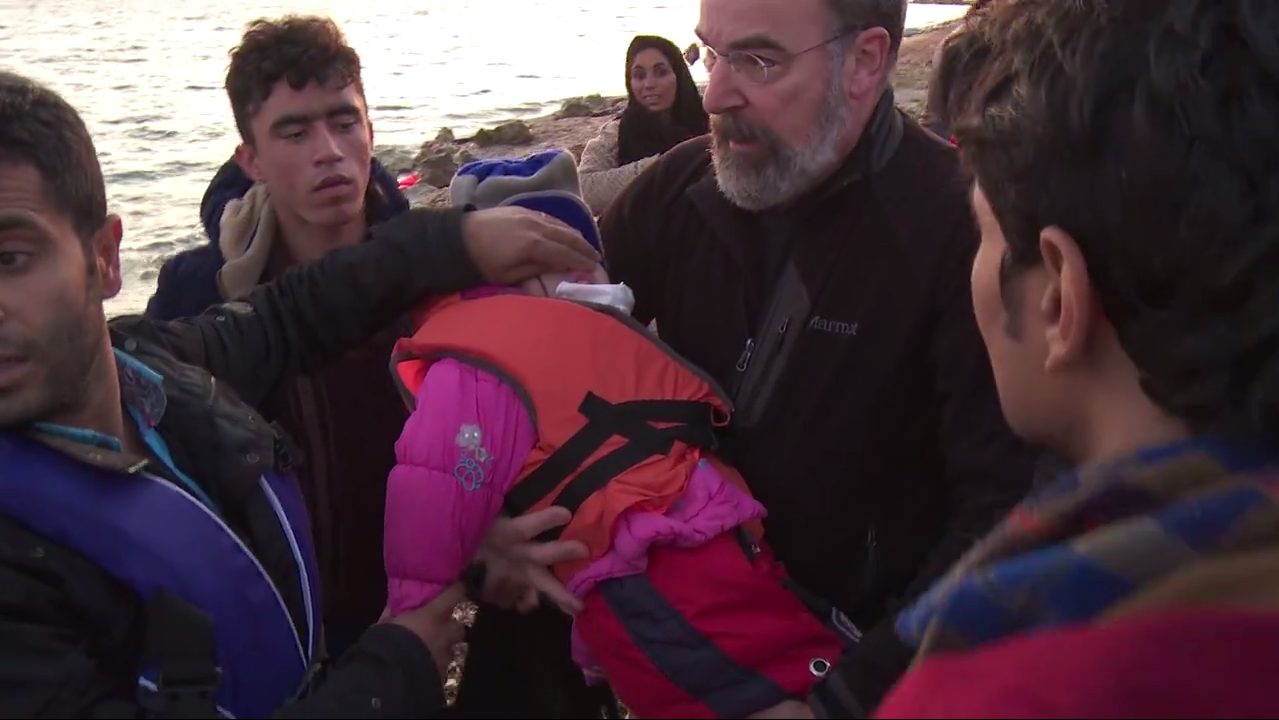 We exchanged WhatsApp numbers and email addresses and promised to stay in touch. Before we parted, I asked, “Are you afraid?” Instantly, both parents replied, “No, we are no longer afraid of anything.”
The next morning, as we were leaving for the airport, people started shouting that a boat was landing. We ran to the beach and discovered that it was theeighth boat that had landed since sunrise. It headed straight toward us. As we grabbed the ropes to hold the boat, the people inside started leaping out toward shore.
A father handed me his small daughter, while he turned to help his son. The daughter was in a pink jacket and wearing a white surgical mask; she was clearly sick, and when I pulled the mask off, she was completely still, her eyes closed. I wondered whether she was alive.
I wanted to loosen her jacket and remove her life preserver, but her father wouldn’t let me: She would need it to keep warm. He couldn’t accept that she might not make it, and I couldn’t, either. I told him I thought her finger had curled around mine, but I wasn’t sure. Then they were whisked to a medical center. I asked friends from the IRC to please let me know whether she survived.
“I saw death behind me and life in front of me.” My family might have spoken the same words in Yiddish or Russian or Polish as they made their perilous journeys away from their homes. As I listened to the stories of these new generations of refugee families and thought of past generations of my own, the fear-mongering news cycles faded away, and I saw clearly that we cannot fight fear and hatred with more fear and hatred. We must not allow the horrific actions of madmen to cut us off from our humanity.
The extraordinary people I met the week of Thanksgiving — the selfless rescue workers, the Syrian families seeking refuge, the people of Lesbos, who have opened their homes to those experiencing this enormous suffering — have taught me that the only way to build peace is to connect. We must build relationships, get to know one another’s children, open our arms rather than close our hearts.
Our governments will continue to work to prevent more horrific attacks such as those in Beirut and Paris. That is their job. On television, it’s a job I pretend to do. But as a citizen of the world, what I can do — what we all can do — is continue to be welcoming to those fleeing death and seeking life for themselves and for their children.
You can call your representatives and ask them to continue the long-held American tradition of refugee resettlement — with a specific focus right now on Syrian refugees. If you live close to an International Rescue Committee office in the United States, find out how you can assist a refugee family as they transition to American life. Invite a newly arrived family to your home for a welcoming meal. Listen to their hopes and dreams, and share your own. Only through loving and supporting one another, even in the face of unbearable pain and suffering, will this cycle of violence end.
As I put these thoughts to paper, I got word that the girl in the pink jacket was alive. She should soon be healthy enough to make the rest of her journey. Today, I ask you to please join me in making sure that, like that little girl, and like so many of our ancestors before her, all those fleeing violence arrive to outstretched arms of welcome.

“I just don’t get it. I don’t get how people in different countries all over the world can be frightened of people who suffered so much, who are so in need, who are so desperately asking to have freedom, justice and dignity. Just give them a welcome.”Our video from Mandy Patinkin’s recent trip with IRC to Lesbos, Greece, in which he traveled to as soon as he wrapped shooting this season of Homeland. For more on Mandy’s perspective on the refugee crisis, read his latest op-ed on the Washington Post: http://bit.ly/1IONmYV