U.S. Permanent Representative to NATO, Ambassador Douglas Lute, had a Telephone Press Briefing on February 9, 2016 with journalists in order to preview this week’s NATO Defense Ministerial. 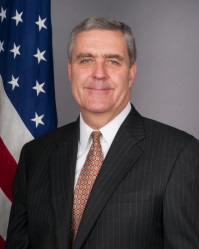 Ambassador Douglas Lute in his opening remarks said that ”what we expect Ministers to do is to first discuss and ultimately approve a new framework for NATO deterrence and defense.  You might call this 21st Century deterrence”.

”I think a very prominent contribution to that deterrence was the U.S. announcement just a week ago that in the coming year we will increase by four-fold the U.S. commitment in finances to bolstering our contribution to deterrence here in Europe”, the U.S. Permanent Representative to NATO underlined.

Asked about the U.S. perspective on the issue concerning Turkish and German request to NATO’s allies to help in monitoring the border and the coast, the Ambassador answered ”Now having to do with the press reports from yesterday between Chancellor Merkel and Turkish leaders, I read those too, but they have not been formalized yet, although they might be in the next two days.  So we’ll have to simply see what transpires during the Ministers meeting and there will be space, and of course Ministerial meetings are a prime opportunity for any one of the 28 allies to bring such requests to the Alliance.  But quite candidly, we’ll have to just see what either the German or the Turkish Ministers have to say on this matter. So all I can say is I’ve seen the press reports and I await their comments in the next two days.”

”Our response is actually similar in both instances, and that is that wherever airspace of one nation meets airspace of another nation, there is a two-part responsibility to abide by international protocols, international rules with regard to that airspace.  In the case of Turkish and Greek airspace, typically those questions that occasionally arise between Turkey and Greece are dealt with diplomatically.  They’re dealt with in responsible channels and there’s a longstanding pattern of responsible behavior on behalf of those two allies. We would like all such airspace questions to be dealt with so responsibly as both our Turkish and Greek allies have demonstrated over the years. So there are international rules here and the U.S. position is those rules should be abided by.”, the U.S. Permanent Representative to NATO, Ambassador Douglas Lute answered.

”What do you think is Russia’s long-term ambition with Syria?” asked Jessica Josefsson from TV4 in Sweden.

”I think Russia’s objective in Syria is to keep Asad in power and therefore retain Russian influence in the region. Because of Russia’s longstanding historical relationship with the Asad regime, both under Bashar al Asad and previously under his father. And of course Russia has a naval base in Tartus. It now has a significant air presence just north of there in a Syrian base. So this has, I think, everything to do with retaining, preserving Russian influence in the region. But also I think there’s evidence that Russia wishes to be a player, wishes to assert itself on the international scene and have a voice in the affairs in the Middle East. That appears to be Russia’s objective. What appears not to be an objective is the fight against ISIL, and this I base simply on the empirical data that shows who Russia is fighting — that is the opposition — and who Russia largely is not fighting — and that’s ISIL.” the U.S. Permanent Representative to NATO, Ambassador Douglas Lute said.

In August 2013, Douglas E. Lute was sworn-in as the Ambassador of the United States to the North Atlantic Treaty Organization (NATO). From 2007 to 2013, Ambassador Lute served at the White House under Presidents Bush and Obama, first as the Assistant to the President and Deputy National Security Advisor for Iraq and Afghanistan, and more recently as the Deputy Assistant to the President focusing on Afghanistan, Pakistan and India. In 2010, Ambassador Lute retired from the U.S. Army as a lieutenant general after 35 years on active duty. Prior to the White House, he served as the Director of Operations on the Joint Staff, overseeing U.S. military operations worldwide. He served multiple tours in NATO commands including duty in Germany during the Cold War and commanding U.S. forces in Kosovo. He holds degrees from the United States Military Academy and Harvard University.